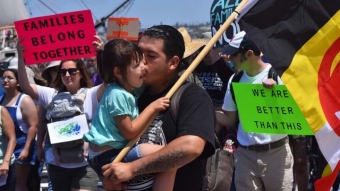 By Ken Stone and Chris Stone

Jessica Kane of La Mesa had her children wearing what resembled the reflective solar blankets given to migrant children at shelters after being separated from their parents.

“I think when people see it with my kids, it can remind them and hopefully touch their hearts,” Kane said.

They were among several thousand demonstrators protesting President Trump’s immigration policies for a second week in a row at Waterfront Park adjacent to the County Administration Center.

The protest was one among hundreds of “Families Belong Together” rallies held in U.S. cities to criticize policies that led to the separation of several thousand families at the U.S.-Mexico border in recent weeks.

“The most important message is that we cannot be silent, that we need to rise up, we need to protest,” Enrique Morones, director of the San Diego-based immigration human rights organization Border Angels, told City News Service at Waterfront Park, where the downtown protest began. “A society is judged on how we treat our children. And what is taking place right now is horrific.”

The Trump administration in April enacted “zero-tolerance” policies that included separating children from their parents as they try to enter the United States.

On June 20, the president signed an executive order reversing the family separation part of the policy, but keeping in place the administration’s intent to prosecute anyone caught entering the United States illegally, meaning that children and their parents will be detained together.

“When people come into our Country illegally, we must IMMEDIATELY excort them back out without going through years of legal maneuvering,” the president tweeted. “Our laws are the dumbest anywhere in the world. Republicans want Strong Borders and no Crime. Dems want Open Borders and are weak on Crime!”

Tanya Benitez, who was at the event volunteering with Border Angels, said she was impressed and encouraged by the number of people who showed up. 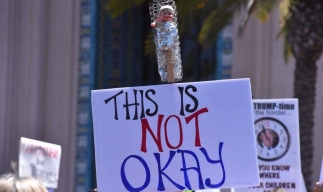 Photo, right:  A sign with a doll surrounded by wire was carried by a protester. Photo by Chris Stone

“You can see a lot of unity here,” she said. “It’s definitely amazing just to see it and it feels really good.”

At the Carlsbad protest in Cannon Park, the atmosphere was tense as police posted signs warning that a permit had not been issued for the protest, and anyone participating in an event of 50 or more people could be arrested.

Organizer Robin Mastro told The San Diego Union-Tribune that she received a letter from the city attorney saying she, too, could be arrested if the protest were held.

“They said they could arrest me even at my home,” Mastro told the newspaper.

Carlsbad sent out a pair of tweets during the protest.

“Lots of confusion about sign at Cannon Park. Organizers didn’t get a permit but we respect your right to protest. The goal is to keep everyone safe,” one said. 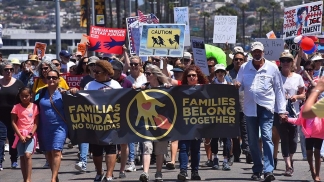 “Protest is peaceful and lawful,” it said.

A few counter-protesters were gathered at the Carlsbad protest, according to the Union-Tribune, including one man who held up a sign that read “No border no country” on one side and “Long Live ICE” on the other.

Border Angels founder Morones, at the downtown rally, introduced himself as a native San Diegan “and a very proud 100 percent Mexicano.”

He labeled Trump “pure evil” and connected family separation to the larger issue of refugees worldwide.

In calling for a moment of silence, he said: “Let’s think about the 8,000 migrants that died last year crossing borders — most of them crossing from Africa to Europe and Middle East into Europe.”

More than 11,000 immigrants have died on the U.S.-Mexico border, he said, “because of that wall.”

He promoted Border Angels, which places water in the desert the third Saturday of every month (including November 2016, when 500 volunteers showed up — ten times the normal turnout — “because people are outraged”).

“I know how to pronounce it,” he said. “It’s called Bad Hombre. I’m a bad hombre. My partner said: ‘What about me?’ I said have no fear. So now we have bad mujer (woman). This is the Year of the Mujer.”

He encouraged his fellow Bernie Sanders backers to vote because “a lot of people didn’t vote in 2016. Now look where we are. We can never, ever let it happen again.”

Typical of government entities attempting shut people up and repress their thoughts and ideology. Trump will no doubt encourage the police to enforce any law they can invent, to quell the voices. I think 'the people' have had enough of this repressive government and we will see more protests with loud voices being heard. A call for real change is long overdue. Keep it peaceful everyone!