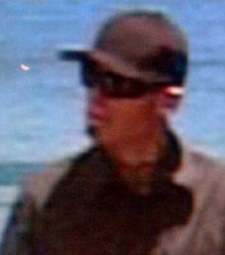 December 16, 2014 (El Cajon) - A man suspected of robbing two banks in El Cajon and a third in La Jolla has been arrested after stealing a van and leading authorities on a chase across San Diego and Riverside Counties.

31-year-old Jared Levi Hanson was arrested December 4th near I-15 at the Mercy Road exit. He was driving the stolen vehicle and armed with a .45 caliber semi-automatic pistol.  He is alleged to be the robber dubbed the “Chit Chat Bandit,” says FBI special agent Darrell Foxworth.

The first robbery in the series occurred on November 26th at a Wells Fargo Bank in La Jolla, where the Chit Chat Bandit handed the teller a demand note and engaged in small talk before leaving with the cash.

Two days later, the Chit Chat Bandit struck another Wells Fargo, this time inside a Vons grocery store in Camino Canada in EL Cajon. After robbing two tellers, he was seen leaving the scene on a green BMX-style bicycle.

Then on December 2nd,  a man believed to be the Chit Chat Bandit held up the Citibank on Fletcher Parkway in EL Cajon, where he assaulted a bank customer.

The investigation, which included El Cajon Police and other agencies, led authorities to suspect Hansen of these crimes.  They learned that he had reportedly fled to Riverside County to avoid capture.

There, he tried to carjack an elderly couple’s vehicle, but they refused to exit the vehicle.  Armed with a .45 caliber semi-automatic pistol, he reportedly fired a round into the ground and another at the vehicle’s grill, the FBI reports.  The couple refused to come out of the vehicle, so Hansen allegedly ran across the street and threatened at gunpoint a man hanging Christmas lights outside.

He allegedly demanded keys to the man’s van, then stole the vehicle.  Officers from the Riverside Sheriff and California Highway Patrol pursued Hansen from Riverside County to San Diego, where he was subsequently captured.

Thus far he has been charged only with crimes stemming from the carjacking though other charges may be filed as the investigation continues.