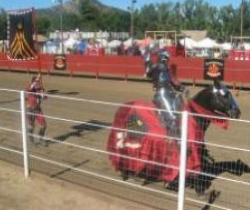 October 29, 2012 (Poway)- “We thought the fires would defeat us, but instead we have risen,  phoenix-like, from the flames,” English competitor Dominic Sewell declared back in 2007. The Witch Creek fire had just ravaged our region, but organizers decided that the tournament would go on.  Hence a name for the event was born—and it’s been held ever year since, with more competitions, displays and exhibitions each year.

This year, a Skills at Arm competition, Roman gladiators, glasswork, pony rides and local artisans, were among the new attractions--along with perennial favorites such as jousting and a pollaxe competition. Unlike staged events elsewhere, these steely competitors use genuine weapons and engage in real combat as they strive to keep chivalry alive--and educate the public.

In addition,more than eight registered charities including ‘Coyote Canyon Heritage Head’, ‘Emergency Animal Rescue’, and ‘Friends of Cats Inc. were added on.

According to the website, this event is “the only event of its kind in the U.S. and one of the most prestigious in the world…It is invitational, and only the most highly skilled competitors are invited to compete for the coveted Phoenix prize.”

Six knights competed for the coveted Phoenix prize in the joust (where each aims to strike the opponent squarely on the shield to break the lance and score points). in the pollaxe combat (where they battle it out on foot attempting to strike each other or drive the opponent to the ground with six-foot long axes). and in the club tourney (here all knights fight each other on horseback using clubs called ‘bastons.’)  The knights competing were Tobias Capwell of USA/England, Marcus Hamel of Canada, Jeffrey Hedgecock of USA, Sean Francis George of England, Steve Mallet of England, and Luc Petillot of France. 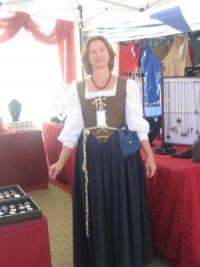 ECM took a tour of the rodeo grounds, led by media representative Janice Kall. She pointed out the ‘Chivalry Today’ exhibition led by Scott Farrell. Farrell described the different sets of armor displayed, emphasizing that 'Chivalry Today' “provides educational programs that focus on the concept of knighthood, ideals of chivalry, and how they fit into today’s world.”

Kall also pointed out the different charity booths set up as well as “re-enactments of the Middle Ages, Renaissance, and Roman gladiators. There are educational activities for kids, including a blacksmith and glass maker.”

Other attractions included Marilyn McPhee, storyteller, a Shetland pony named McDuff, an herbalist, a weaver, and a gyspy pony, who according to the announcer, Paul Giles, is “the most versatile animal.” This particular gyspy horse is an “11 year old gypsy mare from northern England and has produced four foals,” he said.

In the main event, the Jousting Tournament on Saturday, each knight would “compete for the highest point tally and for recognition of chivalry and honor. A maximum of four points is available for each pass with three encounters, which is a total of 12 points maximum.” Farrell and Giles led announcements. There were a total of six matches. Each knight battled it out, giving it their all.

Even the lady of honor, Kyle Van Dolah, experienced the jousting up close on the grounds, where the knights fought. In the two days, that this event took place, Kall mentioned “Steve Mallet took 1st place and Jeffrey Hedgecock 2nd place by one point. But in a conference, Mallet declared it a draw, so it ended up being a tie between Steve and Jeffrey.”

Other events on Saturday included the Festival of History and The Art of Swordsmanship.  Visitors also learned about falconry, experienced music, and delighted over exhibitions of vaulting, gladiators and blackshires.

ECM also got a chance to interview Gwen Nowrick, co-producer of the ‘Tournament of the Phoenix.’ When asked who first came up with the idea for this event, she said it was a joint idea between her husband, Jeffery Hedgecock [one of the knights] and her. As for contacting competitors from other countries, like France and England, she added, “This is a pretty high profile event…It says to them you’re of a certain level to be invited here. We find out about them through reputation. Sometimes they apply, they come to us, or we find them.” Word gets out for this event through “roadsigns, flyers, brochures, and magazine articles. People return year after year.”