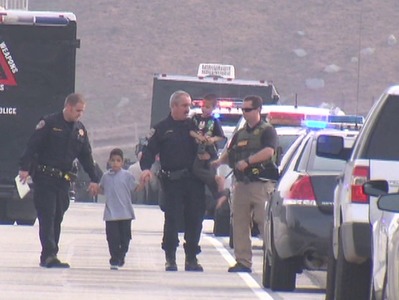 January 19, 2016 (San Diego) – California Highway Patrol Officer Jared Mikulsky helped save the lives of four kidnapped children in a dramatic rescue on a Santee freeway overpass back in 2014.  Now his own two-year-old daughter, Kaylee, has been diagnosed with leukemia.  She is undergoing chemotherapy treatments at Rady Children’s Hospital.  Officer Mikulsky and his wife, a nurse, are asking for the public’s help to pay for costs their insurance does not cover, 10 News reports. They have set up a GoFundMe page here where you can donate.

Officer Mikulsky was hailed as a hero as one of the officers who rescued four children abducted by their father, Daniel Perez, who was accused of murdering the children’s mother.  A statewide Amber Alert was issued for the missing youngsters.  Spotted in East County, Perez led officers on a high-speech chase that ended on the on-ramp from State Route 52 to State Route 125.  When his vehicle was forced to stop, Perez leaped out and ran toward the edge, as if to throw one of the children off, NBC reported at the time.  Officers reportedly subdued the suspect with beanbags, then rushed in to save all of the children.  An image of Mikulsky and fellow officer Jiri Rutner leading two of the youngsters to safety became an iconic photograph.