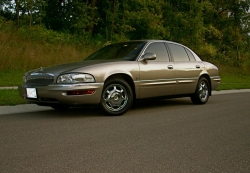 November 30, 2011 (El Cajon ) – An investigation into the death of motorcyclist Shawn Russell Kinzer, 40, has determined that his injuries were caused by a hit and run accident—not losing control of his vehicle as initially reported by authorities. The accident occurred on November 10 at 8:40 p.m. on I-8 east of Magnolia.

“There is physical evidence establishing a possible description of the other vehicle,” CHP officer Brian Pennings revealed in a press release issued today. “The CHP is looking for a light-colored 1997-2001 Buick Park Avenue. The vehicle will have minor to moderate damage on the left side,” he said, adding that the left side mirror, doors, and possibly left front portion of the vehicle may have been damaged.

Kinzer was traveling eastbound on his 2003 Honda CBS 600 motorcycle when he was struck thrown into traffic lanes, suffering fatal injuries. He was taken to a hospital, where despite resuscitative efforts, he died.

Anyone with information is asked to contact the El Cajon Office of the California Highway Patrol at (619) 401-2000.