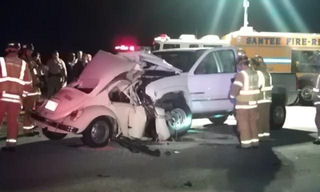 January 31, 2013 (Santee) – California Highway Patrol is looking for two people who reportedly stopped  to provide aid at the scene of a fatal collision on eastbound State Route 52 near Mast Boulevard on December 29, 2012.

According to witnesses, two males stopped to help the driver of a Chevy 2500 HD, and then left the scene before contacting officers.  The Chevy had collided with a tan Volkswagen beetle.  The driver of the Volkswagen sustained fatal injuries and died at the scene.

The Chevy driver was taken into custody for suspicion of driving under the influence of alcohol.

If you have additional information on the two male witnesses, please contact Officer B. Clinkscales at (619)220-5492