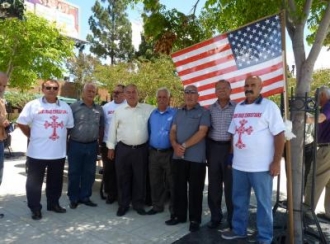 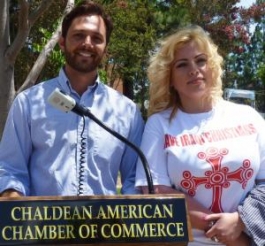 July 21, 2014 (El Cajon) –They carried an American flag, proud to be in a country where they are free. But their hearts ache for loved one endangered in their homeland: Iraq.  They are Iraqi-American Christians who rallied Friday in El Cajon's Promenade Park, pleading for political leaders to save Iraqi Christians from massacre by terrorists invaders who have declared an Islamic state, or caliph.

Farouk Georges shared the latest chilling news. Just one day earlier, he revealed, sources inside Iraq told him that the terrorist group ISIS “issued a decree against the Christians of Nineva…They are asking them to leave, or to convert to Islam, or be killed.”

A million and a half Christians in Iraq have been displaced, said Ben Kalasho, president of the Chaldean-American Chamber of Commerce and organizer of the rally. “We’ve counted 120 churches that have been bombarded and destroyed.” Thousands of Iraqi Christians have been killed, hundreds have been kidnapped and as of a few days ago, he revealed, “ISIS has spray-painted the letter N on Christian homes, letting everyone know where the Christians live.”  The N is for Nasrani, an Arabic word meaning Christian. 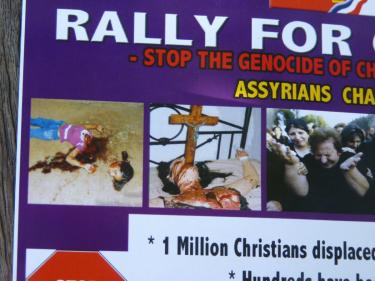 The killings are brutal, as photos passed out at the rally (taken by Mideast media) document. One shows a 9-year-old girl who has been beheaded, her entire family slaughtered. Another displays a woman who was gang raped, then murdered--a cross shoved through her throat.

Dr. Ghassan Hanna, PhD, revealed that the homes of those who fled have been seized by the Islamic state.  In addition, the terrorists are shutting off water and power to Christians’ homes and towns, seeking to force them to flee.

Hanna called on President Barack Obama to “wake up” and take action.  “I was deployed two times,” said Hanna, a  U.S. military veteran who served in Mosul. “We spent billions, wasted,” he said, noting that despite all the lives lost in the war, innocent Iraqi Christians who have not engaged in fighting are now being killed by “intolerant groups” touting “supremacist” policies.”Where is the respect for our dead?” he implored. “Is this what a superpower should be doing?”

Over 4,000 Christian families have fled  their homes in the past two weeks. The only other option for Christians to avoid death if they stay in Iraq is to pay a tax.  But even then, the Christians are treated as second-class citizens who cannot vote or hold certain jobs under the new Islamic state, or caliph, declared by ISIS after the Al Qaeda splinter group invaded Iraqi cities including Mosul, home to many Chaldeans, Assyrians and Syriacs, all Iraqi Christians. 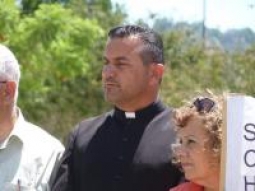 Georges believes terrorists pose a “serious threat to the civilized world” and that he believes we have a duty to protect innocent people who are being slaughtered.  He wants to see a peacekeeping force in Ninevah.

San Diego’s East County is home to an estimated 40,000 Iraqi Chaldean Christians, as well as Assyrian and Syriac Christians from Iraq.

While the vast majority of those being killed are Christians, other majorities are also being slain by the terrorists, multiple sources at the rally said.

Two Islamic men also came to the rally, standing silently.  One of them, Abed Almudafar, said they heard about the rally at the mosque and came to show support. 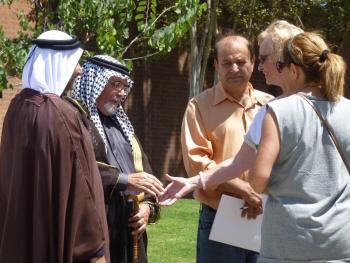 It’s not justice, it’s suffering,” he said of the persecution of Christians in Iraq. “My nephew married an Iraqi Christian and we all celebrated. In Iraq, we don’t discriminate between religions. What’s causing all this chaos is extremists from other countries—from Afghanistan, Pakistan, Syria,” he told ECM, speaking through a translator.

A young woman identified only as Claudine spoke last. An Assyrian Christian whose country has vanished from the earth, she spoke of “history repeating itself.” She recalled how her grandfather had to flee into the mountains to escape the Ottoman Empire a century ago. Now once again, conquerors are murdering those who refuse to convert to Islam.

“This has to stop,” she said, her voice trembling but firm as she pleaded for “Obama, anyone in power, to help them.”

She also had a message for people here in East County to set aside differences. “Let’s be united,” she said. “Let’s come together and comfort each other.”

Only one elected official came to the rally: El Cajon Councilwoman Star Bales, an Assyrian Christian from Iraq.

In an interview after the rally, Kalasho said the marking of Christian homes is reminiscent of the Holocaust, when Jews in Germany were forced to wear the Star of David on their arms before they were rounded up and sent to death camps.

“They are leaving their homes and their vehicles behind,” Kalasho said of the refugees fleeing for their lives.  “Innocent people are dying. People are just trying to survive.”

While some at the rally decried the rapid pullout of U.S. troops and called for Americans to finish what they view as unfinished business, Kalasho has a different view.

“I don’t see a need for U.S. troops on a scale that we had before,” he states, adding that until Iraq unites, it would be pointless to send in more troops.

“The long term solution, and we’re working with people in the Iraqi Parliament, is the creation of a 19th province in Iraq for Christians and minorities,” he told East County Magazine.  “We see that ultimately as the thing that is going to calm this situation down.” Kalasho acknowledged, however, that creating a new province would be difficult to accomplish unless Iraqi Prime Minister Nouri al-Maliki steps down. He cites what he terms Maliki’s “failed leadership,” noting, “A thousand ISIS terrorists made 30,000  Iraqi troops flee.”

A relief effort to help Iraqi Christian refugees  in the Middle East with immediate aid has been set up at www.GoFundMe.com/SaveIraqiChristians through the Assyrian Aid Society, said Kalasho, who added that donations of all amounts are welcome and needed.

Some may ultimately become our new neighbors in San Diego’s East County, which has the second highest population of Iraqis in the U.S., after Detroit.  The United Nations is likely to send refugees to several countries, including the U.S.  But even if the new wave of Iraqi Christian refugees is sent to other American cities, Kalasho predicts that with family and loved ones in our region, “many of them will find their way here.” 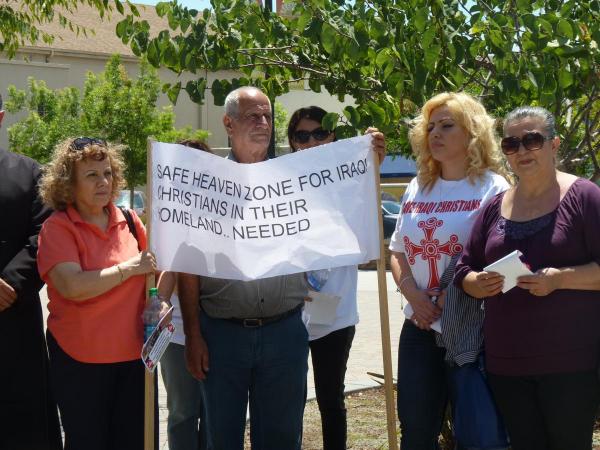