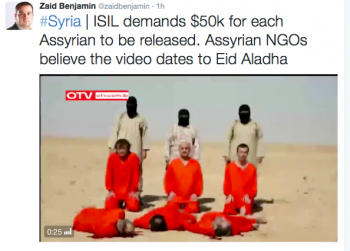 October 10, 2015 (San Diego’s East County)--Militants with ISIS, the Islamic State, have released a video that appears to show executions of three Assyrian Christian hostages captured  in Syria in February, the Guardian reports. The terrorists are threatening to kill 200 more hostages, including women and children, unless hefty ransoms are paid for each prisoner, according to the Syrian Observatory for Human Rights.

Assyrian and Chaldean Christians have faced genocide at the hands of ISIS for refusing to convert to Islam. International leaders are urging President Barack Obama and Congress to take action, but thus far those please seem to have fallen on deaf ears.

Locally, Mark Arabo, a leader in the Chaldean community, issued this statement. “"It breaks my heart to see the continuous bloodshed, and the constant persecution of Christians by ISIS. Scholars, journalists, and the American public are in consensus that more must be done to end this genocide. Yet, our government continues to remain inactive. Every video is yet another reminder of the victims our government has left to rot in Iraq and Syria.”

The Assyrian International News Agency reports, “During the three-day assault on Christian villages in Syria in which the men were kidnapped, churches were burned to the ground and hundreds of Christians were taken hostage. In August another 250 Syriac Orthodox and Syriac Catholic families were captured. Those who have escaped tell of the 'schools of death' to which they were sent, where men are executed and women and girls turned into sex slaves if they refuse to convert to Islam.”

Thousands have fled, creating a refugee crisis unmatched since World War II, but many others have stayed in their homelands, where they face potential extermination.

A month ago, a resolution was introduced into Congress, House Concurrent Resolution. 75, calling upon US lawmakers to officially recognize crimes by ISIS against minorities as 'genocide.' Pope Francis has urged the United Nations to come to the protection of these vulnerable communities.

This week over 100 religious leaders, scholars of genocide, and human rights advocates entreated President Obama to protect Christians and other religious minorities with a declaration of genocide, which would allow the legal weight of the international community to hold perpetrators accountable, while also expanding asylum and relief efforts.

In Defense of Christians Executive Director Kirsten Evans issued a statement, which includes the following: