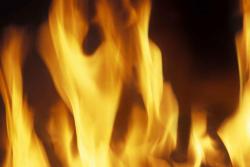 December 25, 2013 (Spring Valley ) – In the early hours of Christmas morning at 12:32 a.m., Lemon Grove Sheriff Deputies responded to a radio call to help San Miguel Fire Department at a brush fire reported near homes on South Granada Avenue in Spring Valley.  Upon arrival, deputies and firefighters found a residence on fire at the rear of the house.

Fortunately, residents had safely evacuated.  Firefighters doused the blaze and asked Sheriff’’s Bomb-Arson unit to investigate. The fire’s cause was determined to be accidental.

A damage estimate to the home has not yet been determined, however no other homes were burned and no injuries occurred.