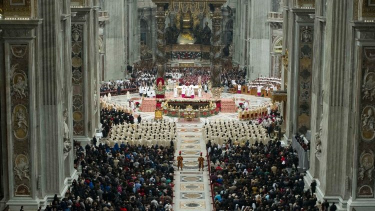 Pope's homily for Christmas Mass during the night: full text

December 25, 2017 (The Vatican) -- In his homily at Christmas Mass in St Peter’s Basilica during the night, Pope Francis drew parallels between Biblical refugees Joseph and Mary and the millions of refugees around the world today who are “driven from their lands” under desperate circumstances, often forced to leave family members behind.

“In many cases,  the Pope observed, “this departure is filled with hope, hope for the future; yet for many others this departure can only have one name: survival. Surviving the Herods of today, who, to impose their power and increase their wealth, see no problem in shedding innocent blood.”

He urged compassion and a welcoming attitude toward refugees, in stark contrast to the harsh policies imposed by the Trump administration, which has sought to restrict admission of refugees and increase deportations, tearing many families apart.

In his homily, he called for peace and pronounced the birth of Jesus “a source of hope.”

Speaking to a large audience of pilgrims from around the world, as well as millions more watching online, the Pope gave a pointed message to those who have denigrated immigrants and refugees.  The faith we proclaim tonight”, he said, “makes us see God present in all those situations where we think he is absent. He is present in the unwelcomed visitor, often unrecognizable, who walks through our cities and our neighborhoods, who travels on our buses and knocks on our doors.”

He urged people not to fear helping strangers, stating, “Christmas is a time for turning the power of fear into the power of charity, into power for a new imagination of charity, a charity that does not grow accustomed to injustice.”

He quoted former Pope St. John Paul II, who said that “God invites us to be messengers of hope. He invites us to become sentinels for all those bowed down by the despair born of encountering so many closed doors. In this Child, God makes us agents of his hospitality.”

The Pope closed his Christmas night homily by imploring all Christians to not be indifferent to the suffering of others, but instead to see Christ “in all those who arrive in our cities, in our histories, in our lives.”

In a Christmas Day address, Pope Francis also prayed for peace in the Holy Land and around the world.  He urged people to see the face of Jesus in all children, from war-torn Syria, Palestine and Israel to children suffering starvation and disease in Yemen, immigrant and refugee children, children of unemployed people struggling to provide for their families.

"May our hearts not be closed as they were in the homes of Bethlehem," he said, alluding to the circumstances that led Mary to give birth to Jesus in a manger, according to the Bible."And may we commit ourselves," he concluded, "with the help of His grace, to making our world more human and more worthy for the children of today and of the future."

This is priceless. An editor quotes the Pope only because he makes statements in conformity to the Democratic Party Line. Of course, nothing in this Democratic Central Committee blog about the Pope's quotes regarding abortion. Enough is enough. This is the last time I open this website. If you advertise here, I'll not buy your product or service.

We've quoted Popes through the years, particularly on religious holidays, as most major newspapers in the world do, too  We have quoted Popes who spouted conservative views in the past and have quoted this Pope on abortion previously where his views were conservative, as well as quoting him on some issues where his views are liberal. He is the leader of the largest church in the world, and whatever his views are, they are newsworthy.  In this case, he points up the hypocrisy of people who espouse hatred toward all refugees, yet claim to be Christians in a faith that worships a child born of refugees.

That I love when the point of our Father's messages just goes WHOOSH! right over you people's foreheads?

The pope speaks only for himself and the Catholics who let him speak for them. Otherwise he is just a far left loon who should clean up his own messes.

I'm with family and I'm just

Not even gonna bother anymore...