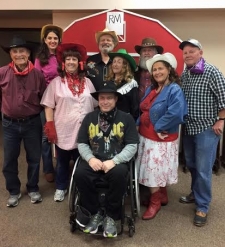 November 24, 2015 (El Cajon) - "The Circle players is a theatre outreach under the Neighbor to Neighbor program of the First Presbyterian Church of El Cajon. The goal of The Circle Players is to provide a resource to those in our community who want to share their talent in acting and other performing arts, as well as technical and production aspects of the theatre. 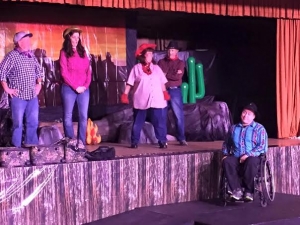 The Circle Players is a hospitable and welcoming group who provide for twenty dollars, not only a murder mystery play, and a meal, but an entire theme filled event--an interactive good time for all.

I have been out for two events; first, the Murder Mystery Cafe, last Spring. I loved that one. I've been to several murder mysteries of this sort and this was by far my favorite. The suspects actually came and sat down at your table for you to question, and there was an actual clue for you to be able to solve the crime.

This past weekend The Players presented Wrangle at Red Mountain Ranch by Nancy Bond, directed by Joel Gossett. This was a real hootenanny. For this show you were invited to wear your western duds.You sat at long picnic tables with red checked tablecloths, bowls of chips and salsa, pitchers of .lemonade and water. Little pails held the silverware, ballots, and a cowboy themed word scramble to add to the fun.

We were serenaded while we waited by a five piece band, Howard "Boss Man" Bivens, Cindy Graham "Crackers", Eric "Sven' Lingren, Dennis "Rusty Fingers" Mckinley, and "Hang on Heidi Mckinley. They set the mood with old country tunes and invited people to sing-a-long while we were being served our hearty meal.of chili, pork, cole slaw, cornbread, and a Hawaiian roll, followed by a delicious dessert.

The play itself was more of a take your best guess, after watching quite a bit of acting for this type of play, even a skit within the play. A few people from the audience were invited to participate in the skit. Your chance to be a star. While the entire audience was invited to make horse clopping sounds. Involving everyone added to the total dude ranch theme of the night.  The cast consisted of Hanna Feinstein, Justin Briggs, Kathe Perdue, Jack Vernon, Frank Ferrone, Maxine Levaren, Sharonfaith Horton, Steve Perdun, and Joel Gosset.

In February they will have a staged reading of "The Importance of Being Ernest" by Oscar Wilde.  In October they will do "The Trial of Dr. Martin Luther."

Experience The Circle players for yourself sometime in the near future.