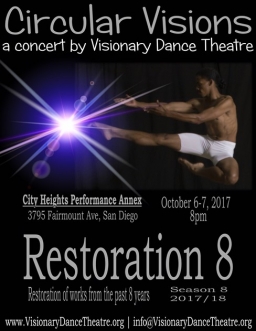 This dance concert kicks off Visionary’s 8th season, titled Restoration 8.  “Join us for the entire season as we re-stage, re-create, and re-image some of our best works from the past seasons,” the invitation states.

Artistic Director Spencer John Powell presents a new work in progress titled “Circular Visions” in collaboration with Assistant Artistic Director Trixi Agiao.  Inspired by Powell’s genealogy work discovered through the findings of his own DNA testing, this work explores how we are all interconnected as humans in this world.  Powell additionally restages his 1995 work titled “The Wall”, a relevant piece in today’s political climate about building border walls.

Internationally-acclaimed choreographer and Professor of Dance at University of South Florida Jeanne Travers presents her 2011 work “Tunisian Nights”, a fast-paced dance set to the music of Dizzy Gillespie, as well has her 1989 work “Spiral Dance”.  Also, Kiona Daelyn (former VDT Master Teacher and Ballet Mistress) will set a new work on the VDT dancers.

Join Visionary for an evening of dance honoring some of their best works from the past as well as new, thoughtful works for the present day.

CLICK HERE to purchase tickets.   Tickets are $14/Advance sale and $19/General. Advance Sale window closes October 1st, 2017.  After that all tickets are $19.