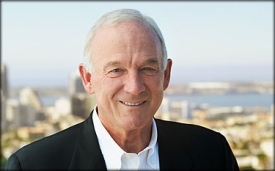 February 1, 2012 (San Diego) – A group of citizens attempted a citizens’ arrest of Mayor Jerry Sanders on Monday, alleging that his deal to temporarily change the name of Qualcomm Stadium without Council’s approval amounted to felony embezzlement.

City Attorney Jan Goldsmith ruled that Sanders violated a municipal code by cutting a deal without the City Council's approval to allow a temporary name change for the stadium to “Snapdragon”, a company that provides mobile processing services to Qualcomm.

An advertising expert has estimated that the exposure was worth at least a quarter million dollars, the citizens contend.

Martha Sullivan, a San Diego resident and business owner participating in the action, said Sanders violated the public trust and did “nothing to eliminate the red ink on the City’s balance sheet.” She said Qualcomm should have paid market rates for the name change promotion. “The Mayor must not be allowed to squander the assets o the city or to set the value of naming rights to nearly zero.”

Chanting “Jail Jerry” and “Snapdragon is a scamwagon,” the citizens displayed a yellow “Crime Scene” tape at the Mayor’s office. They later filed complaints with the city clerk, city attorney and district attorney as well as the state attorney general’s office, urging the arrest and prosecution of the Mayor.

The City Attorney has indicated that Council could authorize the action after the fact. But Council has declined to do so.

“Dumanis should already have arrested the Mayor,” Lutz said of District Attorney Bonnie Dumanis, who is a candidate running for the Mayor’s seat.  “It’s too bad that corporate money has corrupted our elected officials from the top to the bottom.”

The Mayor has declined comment to the media, however his press secretary has called the citizens’ arrest effort “thoroughly ridiculous,” NBC News reported.