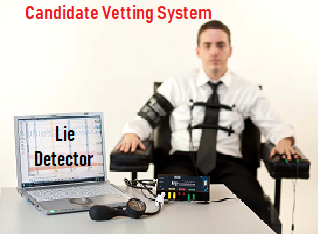 The meeting was convened to propose criteria for filling the vacancy left by the resignation of Councilman Ben Kalasho.

Residents offered some creative suggestions, as our story below details:

Kalasho had a string of ethical and legal challenges ranging from civil suits to criminal complaints, conflict of interest controversies, sexual harassment allegations and concerns over his trained attack dog.

But he was not the only El Cajon Council figure embroiled in controversy.  The history of dubious decision makers has included members of both major political parties.

Several years ago, a former Councilwoman resigned and was convicted of embezzling money from her employer, using the filched funds to hire celebrities for the Mother Goose Parade. A former mayor also resigned, after criticism of remarks perceived as negative stereotypes of Middle Eastern immigrants. There was also “doughnut gate”, an influence peddling incident tied to a past mayor’s sweet tooth. A recent mayoral candidate had a slew of tax liens. Alcohol and tobacco industries sought to curry favor with council members when the city was weighing crackdowns.

The Council must now choose whether to fill Kalasho’s seat with a special election or by appointment.

“While this Council has done many good things for the community, voters or Councilmembers choosing our next representative clearly need to know more about the people they are selecting. So we propose stringent vetting of every candidate or applicant’s background,” announced Mercy Mee, the resident who organized today’s standing-room-only forum through Twitter, Facebook and Instagram posts.

NASCAR champion and hometown hero Jimmie Johnson announced to a cheering crowd that he will donate funds to “clean up races” for El Cajon City Council. Candidates who pass background checks with flying colors will receive honorary racing flags signed by Johnson.

Humane Society volunteer Dobie Shepherd stated, “My role will be to vet candidate’s treatment of animals. Let’s invite each of them to bring in their pet dogs, cats, parrots, ferrets, iguanas or whatever and make sure they are well cared for, since abuse of animals can also be indicative of how one may treat people, too,” he said, in an apparent reference to video of Kalasho training an attack dog that sparked anger among animal rights' advoicates.

Accountant Macon Profit offered to lend his expertise to check out candidates’ financial histories. “Bankruptcies, tax liens, unpaid library fines—a candidate with major debts might be more vulnerable to special interests instead of the public’s interest,” he observed.

Nita Nomore chimed in, “Speaking of money, we need to know where candidates are getting theirs.  Let’s ask them all to sign a pledge not to accept any money from special interests especially alcohol, tobacco and doughnut dealers.”

T. Totaler from the Coalition for a Drug-Free El Cajon stated, “I want to know if they drink or if they smoke tobacco, weed, or hookahs.  Sobriety rules!”

Bud Toker objected, “Chill out, man.  Don’t be a drag.  We need to ask about issues, like who supports ending prohibition on cannabis dispensaries. Let’s give them all a questionnaire.”

Wanda March, a women’s rights advocate, approved of issues-oriented questions.  “We need more women on the police force – and on the city council!” she declared.

Earnest Query asked, “Can they bring back those videos on the city TV channel about the history of pastors that those godless atheists got the city to take down?”

Victor Hermanos stated, “El Cajon is a city with many immigrants. We need to be welcoming and inclusive.  Ask who will support El Cajon becoming a sanctuary city,” he proposed.

Other residents rattled off projects they would like to see Council candidates support including keeping the performing arts center open, bringing back a farmer’s market, banning scooters, housing the homeless, adopting rent control, painting city call any color other than brown, and turning the former Sears store into an indoor waterpark to “really make a splash” as 10-year-old Ben Goode suggested.

Dr. Izzy Schizo proposed asking candidates to undergo voluntary medical and psychological testing to assure voters that they have no mental illnesses or dementia.

But the biggest applause of the night came from Faith Hope, who proposed, “For total transparency and to allow voters to fully assess the integrity of these potential public servants, I propose we videotape candidate interviews—and hook them all up to lie detector tests.  Results will be published in English, Spanish and Arabic in the city’s voter information pamphlets.”