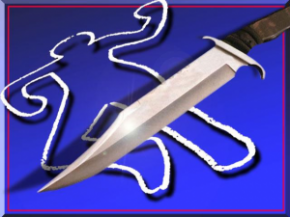 July 26, 2018 (El Cajon)—A 75-year-old man suffered multiple non-life threatening stab wounds tonight in an attack at Second Street and East Madison Avenue in El Cajon. Witnesses called police at 7:55 p.m. to report the victim was on the ground near the intersection.

The suspect fled west on Madison, says Lieutenant Jason Taub, adding, “Witnesses were able to keep the suspect under observation and advise the police department of his current location.”

Officers found the suspect, Lester Riley, 39, or El Cajon in the 1200 block of Madison, still in possession of the knife.

“The suspect refused officer’s commands to drop the knife, and was taken into custody with the use of less lethal bean bag rounds and an electronic control device (Taser),” Lt. Taub states.

The victim was transported to a hospital. The suspect has been booked into San Diego Central Detention Facility for assault with a deadly weapon.

The relationship between the suspect and victim is not known, says Lt. Taub, and the investigation is continuing.  No other suspects are outstanding.

Anyone with information about this incident should call the El Cajon Police Department at 619-579-3300, or anonymously at Crime Stoppers, 1-888-580-8477 or sdcrimestoppers.org.

To those willing to step up and help police catch this bad guy. This is exactly what society needs, not citizens unwilling to get involved.