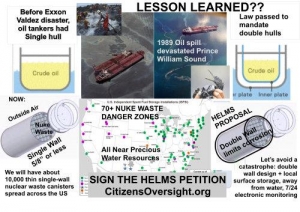 Proposed “HELMS” Storage plan requires 1,000 year design life rather thancurrent 40-year life such as those in use at San Onofre

January 4, 2018 (San Diego) --  Citizens Oversight, the organization that negotiated a plan of action to move the waste from San Onofre, announced  Tuesday that it has submitted a formal petition to the Nuclear Regulatory Commission (NRC) under NRC regulations that govern how the nuclear industry handles spent nuclear fuel.  The basis for the proposed changes is established by the HELMS proposal, also part of the submission, meaning Hardened, Extended-life, Local, Monitored, Surface storage. HELMS requires a design life for safe containment of toxic nuclear spent fuel of 1,000 years rather than the current requirement of only 40 years, despite the reality that the spent fuel will likely remain on the surface for at least 200 years.

Ray Lutz, Founder of Citizens Oversight said, “This proposal dovetails with our recently negotiated settlement to move the 3.6 million pounds of waste from San Onofre to a safer place. We need to ensure that the destination for this waste and every other location where waste is stored meets prudent and reasonable standards. That means it must be designed for the long term and not just for a 40-year time horizon. We are only asking that the NRC deal with a fundamental inconsistency in their own regulations. They now allow indefinite surface storage all over the country, but their regulations only mandate a 40-year design life.”

The HELMS proposal suggests that the current relatively thin (5/8” or less) canisters be enclosed in a much thicker outer shell, which can then preserve the internal canister from corrosion and other deterioration. Also, the outer shell can be easily replaced without a fuel pool or hot cell, and any cracks or other breach of the outer shell can be easily detected using 7/24 monitoring of the internal pressure rather than using occasional robotic inspections that have never been proven to work.

Lutz continued, “We learned from the Exxon-Valdez disaster that it was prudent to use dual-wall oil tankers. Let’s learn the hard lesson and use dual-wall casks rather than these ridiculous thin single-wall cans for high-level nuclear waste.”

The HELMS document and the NRC petition can be found on this webpage:

Public Support Petition is on this page: