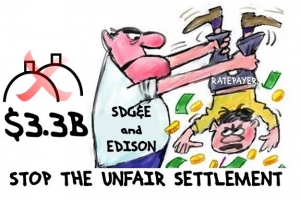 The federal lawsuit exposes how two public officials with a history of granting favors to utility executives allowed  rates charging each citizen an estimated $229.00 (more than $1,000 per electric meter) for the failed San Onofre nuclear power plant in  violation of the "just compensation" provision in the U.S. Constitution. Ratepayers were charged for power that was never generated after the facility was shut down for safety reasons.  The suit seeks restitution of $3 billion to ratepayers.

The suit contends that the Public Utilities Commission illegally allowed SCE too take property, specifically, money, of California citizens via illegal overcharges on SDG&E and SCE utility bills.  Over 17 million utility ratepayers have been harmed by what the plaintiffs call an “unlawful billing scheme,” the suit contends.

“It’s clear the utility has completely rigged the system in their favor,” Ray Lutz, founder of the nonprofit group Citizens Oversight in El Cajon has stated. “They didn’t even have a hearing in the investigation (of the San Onofre shutdown) to find out who was at fault.”  Lutz’s group filed the lawsuit being handled by former City Attorney Mike Aguirre and consumer attorney Maria Severson.

Lutz told East County Magazine that $3 billion in overcharges over a three-year period to 17.4 million people amounted to about 1,000 per meter or $176 per person.

The suit does not currently name SDG&E or its parent company, Sempra Energy, as defendants. Lutz told ECM that plaintiffs had hoped SDG&E would join their suit and seek to recover overcharges from Edison but thus far, the utility has not done so.  The suit may be amended in the future to add SDG&E and/or Sempra as defendants, he disclosed.

The legal action argues that the two most powerful public utilities Commissioners -- Michel Florio and disgraced Commission president Michael Peevey -- engaged in scheduling shenanigans that quashed a legally-required internal investigation into the "reasonableness" of charging SCE and SDG&E customers for electricity they never received.

By avoiding the legally required hearings, the CPUC, the California Public Utilities Commission allowed SCE to take the property of more than 17 million citizens without just compensation in violation of their 5th Amendment right.

Peevey, former chief executive of PG&E, has announced his resignation at year’s end after public records requests revealed improper emails which showed a Peevey staffer promising favorable treatment to PG&E involving the deadly Sa Bruno pipeline explosion. Peevey and Florio have previously been wined and dined extensively by utilities they are supposed to regulate, including SDG&E, San Diego’s power provider.

Citizens Oversight’s website states, “We have obtained more than 7,200 pages of emails and other correspondence as a result of the CPRA (California Public Records Act) request by the City of San Bruno regarding the PG&E Gas Line Explosion in San Bruno in 2010, which killed 8, injured scores, and demolished city blocks in San Bruno. These emails show a pattern of close coordination between the CPUC -- the California Public Utilities Commission -- and the utilities they are supposed to regulate, including PG&E…an initial reading shows a pattern of collusion to manipulate stock prices, coordinate press releases, shop for judges and rig the proceedings to benefit the utilities. We believe this culture of corruption goes beyond isolated incidents,” the site adds, concluding that the problem is “systemic in extent.”