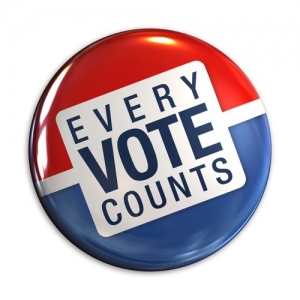 January 31, 2017 (San Diego) – A final judgment has been issued by Superior Court Judge Joel Wohlfeil against San Diego Registrar Michael Vu in the case of Lutz v. Vu.   Lutz had argued that 285,000 ballots–39% of the total--were fraudulently excluded from the manual recount tally following the presidential election.  Judge Wohlfeil agreed that Vu inappropriately omitted 210,000 vote by mail ballots from the audit of the presidential election, but not provisional ballots.

Plaintiff Ray Lutz, an El Cajon resident and National Coordinator for Citizens Oversight, a government watchdog organization, explained in a press release, “The judgment rules that all vote-by-mail ballots must be included in the 1% manual tally audit but inexplicably does not also require all accepted provisional ballots.”

The ruling applies only to San Diego County, for now.  But Lutz pledges, “We will not stop fighting until all ballots are included in the audit process, or we have access to images of all ballots so we can conduct our own independent audit.

Lutz told East County Magazine that he plans to appeal the case “so that it covers all counties in the state and so that it applies to provisional ballots also.”  He predicted the County is also apt to appeal the case in hopes of getting a ruling that would allow the County to avoid the cost of counting all vote-by-mail ballots in the manual tally.

His organization is also pushing for an Open Ballot initiative (www.openballotinitiative.org) a proposed methodology “to get election officials to take digital image scans, jpeg pictures, of ballots and make those available in standard data format so that anybody who wants to can go in and get all of the ballots.”  It also has a methodology for comparing Registrar’s outcomes against others.

ECM has asked Registrar Michael Vu for comment on the case and whether he plans to appeal, as well as his views on the Open Ballot Initiative.   We will publish Vu’s response once received.

A press release from Citizens Oversight provided these details on the problems the group found in its observations and examination of the Presidential audit in San Diego and elsewhere in California:

Unfortunately, most jurisdictions conduct shabby and incomplete audits, blatantly violate the election code, and thus the audits are not much more than theater. Unfortunately, everyone was unable to look past the theater and see the audit fraud. In some counties (such as Los Angeles) the audits do more to cover up election fraud rather than detect it.[1]”

The mud was even thicker on the County's face as they admit they did not even do all the Vote-by-Mail ballots in the general election. They were able to delay the judgment in the case until after the election was certified so we would have no recourse in the current general election, and the judge refused to turn back the clock and force the County to redo the audit in the primary. We had additional concerns in the primary because Vu hired 40 people for a week to locate and pre-stack the ballots to be audited, and then used new computer reports that did not match the report of the initial election.

Prior to the general election, Lutz sent a letter to the top 24 Registrar of Voters (ROVs) in the state including a “Technical Brief” which explains to ROVs how to conduct the manual tally so it includes all ballots within the 30-day period after the election as mandated by law. So it can be done, if they want to follow the law. Some counties did their best to conduct spotless audits, sampling from all the ballots rather than just those processed by election night, but still there are many rogue counties who refuse to be prudent in their operations.

Citizens Oversight will announce at this press conference that they are now promoting an alternative approach, dubbed the “Open Ballot Initiative”[3] which mainly means that election officials will upgrade to systems that create relatively high-resolution images of the ballots and allow independent oversight groups access to these ballots prior to certification, so that we can conduct our own 100% recount and compare our results, or even post them to a public website to allow the public to peruse the ballot images and count them by hand. Ballots have no means to identify the voter, so this does not invade privacy.

“The Open Ballot Initiative is the closest thing to allow hand-counted paper ballots -- the gold standard -- without actually forcing election officials or anyone else to use hand counting. The ballot images can just as easily be run through software from various vendors and sources to resolve and tally the vote as well. If election officials embrace this initiative, we believe the audits can be minimized, mainly to the point of comparing samples of the images with the physical ballots to make sure they match. Thus, this is a win-win. We get better transparency, and they save money on lengthy audits.”

Media and all interested citizens and activists are invited to attend the event on January 31. The event will also be video recorded and live-streamed for those across the country interested in this important issue.

Plaintiffs Citizens' Oversight, Inc. (also known as Citizens' Oversight Projects, or “COPs”) and Raymond Lutz (who originally submitted the case pro per to the court prior to retaining attorney Alan Geraci of CARE Legal Group) claimed that San Diego County Registrar of Voters, Michael Vu, improperly omitted about 39% of the ballots from the election audit, or about 285,000 ballots. The court agreed that about 210,000 of those were fraudulently omitted, while it improperly concluded that the remainder were okay to leave out of such an audit.

This leaves a big hole for undetectable hacking to occur either by a compromised employee or by external hackers with access to the central tabulator, or simply mistakes in tabulating machines. The margin of victory was only 16,000 votes between Clinton and Sanders in the primary, easily hid in the 285,000 unaudited ballots, and even in those 68,000 accepted but unaudited provisionals, even if they follow this judgment. Clearly, such blatant violation of the election code is a form of election fraud.

Full information about the lawsuit can be found at this link: http://copswiki.org/Common/ElectionAuditLawsuit

An important piece of evidence was the complete history of Senate Bill SB-1235 from 2006 by then State Senator Debra Bowen to amend Election Code Section 15360. This bill first added the requirement that Vote-by-Mail (VBM) ballots be included, along with all ballots cast in person at precincts (including provisional ballots) or at satellite locations in the audit process. This set of documents is available at this link: http://www.copswiki.org/Common/M1704.

Citizens Oversight sent a letter Oct 13 to the most populous 24 counties in California, comprising 92% of the electorate, requesting that they comply with the law. A “Technical Brief” was included with this letter explaining how they could comply with Election Code 15360 and still meet the legal requirement that they certify the results within a month after election day.

We must demand that our election officials follow the law!

Donations are accepted at http://CitizensOversight.org/donate

[1] Los Angeles County rescans any precincts that have a variance of more than two or three votes, and then compare only with the new report. This means that if a precinct were off by 10 votes -- just the sort of hack that can flip an election if applied to 1,000 precincts -- that it will simply be rescanned and the new report will show no variance. The only hope of detecting this vulnerability is through our Snapshot Protocol, were we get the election night results and compare with the rescanned reports. We hope that with their new election system, ballot images will be available.