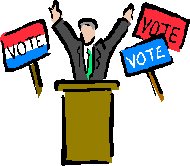 July 30, 2014 (Sacramento)--California’s Legislature has voted to put an advisory measure on the November ballot asking the state’s voters whether they believe the Citizens’  United decision should be overturned.

Citizens’ United was the controversial U.S. Supreme Court ruling that gave corporations and labor unions rights to make virtually unlimited political campaign contributions.  The measure has sparked calls for a constitutional amendment nationally to overturn that ruling by declaring that corporations and other groups should not have the same rights as individual people.

But now the Howad Jarvis Taxpayers Association has filed a lawsuit that claims the measure is an illegal exercise of legislative power to boost voter turnout.  The suit argues that the state should not clutter ballots with nonbinding measures and contends that the measure oversimplifies the complex legal issues.

The California Supreme Court previously threw out an earlier advisory only measure, which had sought to support a federal constitutional amendment to require balanced budgets.