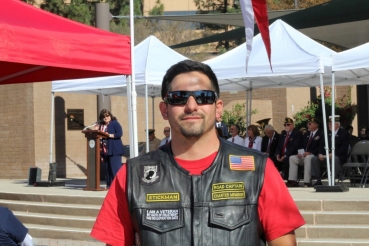 November 13, 2016 (El Cajon) -- The City of El Cajon held a Veterans Day ceremony at Centennial Plaza on November 11th and presented its first Veteran of the Year Award to retired Chief Ray Moody.

In addition to the WWII veterans and others in attendance, a 30-year-old veteran, Kenny Patterson, US Navy, was also present.  He went in the service at 19. The phrase “I am a veteran –my oath of enlistment has no expiration date” aptly applies to Patterson.  He gives back to the community by participating in the American Legion Riders Chapter #303 which raises money to help other veterans.  A vet helping other vets. A vet who was also honoring other vets by his attendance at the ceremony.

Conductor Spencer Caldwell with the Hillsdale Middle School Symphonic Band performed a medley of patriotic songs such as the Bunker Hill Overture and the March of the Armed Forces.

The presentation of colors was done by the Grossmont High School NJROTC.

A City of El Cajon red ladder firetruck and firemen were on hand to honor the vets as well.

A volunteer handed out the paper red poppies with the tag of “Buddy” Poppy--wear it proudly.  The practice of wearing poppies takes its origin from the poem Flanders Field.  Traditionally it is handed out on Memorial Day but was welcomed at the ceremony by an estimated 50 attendees. Refreshments were available after the ceremony.