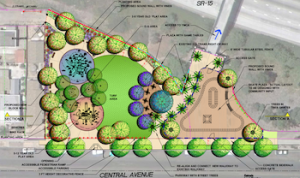 June 25, 2013 (City Heights) – Skateboarders in City Heights will soon be able to enjoy recreation at a Mini-Park and Skate Plaza. The site, designed as a safe place for families to enjoy outdoor activities, will also include a tot lot, playground, turf area and plaza with games, landscaping and trees. Construction will begin in October 2014 with completion due in November 2015.

The total site is slightly less than two-thirds of an acre, with the skate plaza 0.145 acre.  A design phase will include community outreach and input.

The project was made possible by a state grant that Councilmember Marti Emerald has long advocated for. Emerald joined Mid-City CAN and community members Saturday to celebrate the new skate plaza and park slated for Centeral Avenue between Landis and Dwight Streets.

During the Council election, local youths ramped up attention by asking each candidate to sign a pledge to support the skate park.