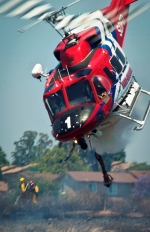 December 17, 2014 (San Diego’s East County) – The Cedar Fire started at night in a remote East County canyon. With no helicopters capable of doing water drops after dark, it quickly raged out of control, becoming the worst firestorm in California history.

This week, Mayor Kevin Faulconer announced that the city of San Diego has struck a deal with the County to allow the city’s two firefighting helicopters make nighttime water drops on wildfires on unincorporated county lands and in the 17 cities within San Diego County.  The choppers, operated by San Diego Fire-Rescue Department, are the only ones in our region capable of dropping water on fires after dark.

Supervisor Dianne Jacob, Chair of the County Board of Supervisors, issued this statement:“The new city-county partnership to extend night flights to all corners of our region is great news for residents and builds on our efforts to bolster fire protection.”

Mayor Faulconer observes, “When a wildfire comes, we have to be focused on results and saving lives, not jurisdictional boundaries drawn on a map,” Faulconer said. “That’s why the city and county are embarking on a new level of cooperation to make sure our region is as prepared as possible for whatever comes our way.”

The agreement took effect December 1st and runs through June 30th, 2016, with options to renew for the future.  But use won’t come cheaply – the cost for the county to use the helicopters ranges from $3,700 to $5,000 an hour.

The action comes after fires ravaged much of North County in May, when our county was declared a disaster area by the state, and a full decade after the Cedar Fire burned oer 280,000 areas, destroyed more than 2,200 homes, killed 14 East County residents and claimed the life of a firefighter.