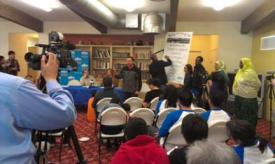 March 18, 2013 (City Heights) -- Crawford High School student Terrance Hall said he doesn't always have bus fare and has to walk 18 blocks to get to school.  Over 400 students in the Center City area alone take the bus to school every day at a cost of $5.00  per day or a regional monthly  bus pass of up to $72.00.

School Superintendent Richard Barrera reported that for four years he has been asking Mayor Jerry Sanders to do something to relieve students and parents alike of this unfair burden only to have his request fall on deaf ears. However the election of Bob Filner as San Diego’s new Mayor changed all that.

Saturday morning, the Improving Transportation in City Heights (ITCH) held a press conference to witness the signing of a pledge to provide students free transportation on the city owned transit system.

Mayor Filner was warmly received by the gathering of parents, students and officials.  He said “Public transportation is not just for those who can pay.”   “Government should start with people and government should respond to the needs of the people.”

When asked how the bus passes would be financed the Mayor answered “The City has a budget of over three billion dollars, certainly we can afford a hundred thousand dollars for school bus passes…This is not spending money, this is investing in students.”

City Council member Marti Emerald and MTS Board member said she would introduce a proposal to the MTS for free student bus passes to the Board and noted that they have $600,000.00 slated for management bonuses.

Richard Barrera acknowledged that the San Diego City School’s budget is “nearly a billion dollars” and he would propose a plan to fund free student bus passes.

The Mayor was so impressed with the student activists from ITCH that he invited a group of students to be his “shadow crew” to follow him through the day as interns.  http://www.midcitycan.org/momentum/improving-transportation-momentum-team