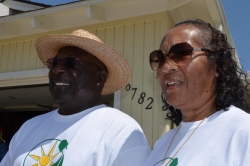 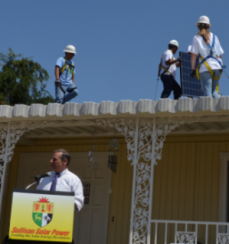 May 2, 2013 (San Diego)—Mayor Bob Filner, Sullivan Solar owner Daniel Sullivan and Paul Cleary of GRID Alternatives hosted a press conference today at the Martin household in Broadway Heights.  It’s all part of a new partnership between the city, Sullivan and Grid Alternatives to put solar on the rooftop of low-income residents.

Sullivan told ECM that the company started in 2004, “with a truck and $2,000. It has grown organically since.”  The company’s goal is to provide rooftop solar “to every home, business an institution.”

The Martins are being helped to install this by GRID Alternatives, which is a non-profit.

“GRID alternative is providing the labor and job training,” said Sullivan, adding, “This community has more solar roofs than other communities.”  He smiled. “We are proving that solar is for everybody. It reduced the carbon footprint and cuts down the need for more transmission lines.”

In his mind distributive energy will change the rules that utilities have used in the past.

Paul Cleary of GRID Alternatives first thanked the family for hosting everybody. “GRID Alternatives is thrilled to partner with Sullivan Solar and the City of San Diego.” Then he pointed to the roof, where installation continued. This will soon be a 3.8 KW\hour plant, with potential savings of upwards of $35,000 over the next 30 years.

Cleary also said that projects like this one “provide hands on experience for people who want to get into the solar field.” 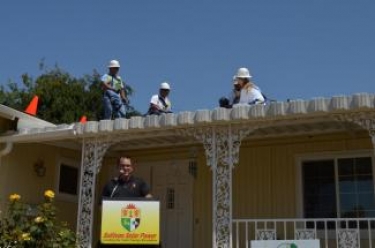 Sullivan Solar “will donate one solar panel on behalf of every family that goes solar with Sullivan,” the owner announced at the event. He estimates that this will provide panels for 50 to 60 homes.

As he introduced Mayor Bob Filner, Sullivan said that the city is blessed to have the Mayor, since he is a man of vision.

Filner called the program “a win, win, win situation. This is the private sector and a non profit getting together.” The Mayor also recognized Robert Robinson, one of the leaders of the Broadway Heights Community for his efforts.

Then the Mayor turned to the hosts, the Martin family, who would be able to save tens of thousands of dollars over the next 30 years. He also thanked Sullivan for “giving back to the community.”

The Mayor admitted to being a dreamer as he is embarking “in the largest solar project in the country” He believes this will lower costs and bring manufacturing to San Diego. Mayor Filner added, “It is good to dream big.

He pointed out that the County and several school districts are already on board.

ECM asked the Mayor about the threatened rate increases that San Diego Gas and Electric has sought, including efforts to hike rates for solar customers. The mayor told ECM that he’d rather see SDG&E cooperate “and not become an obstacle.”

ECM also talked to Jimmy L. Martin, the patriarch of the property. He said that he was a “proud owner and happy about it.”

What got him interested was seeing the work going on around him. Some of his neighbors showed him the utility bill after the Solar installation, and it was significantly lower.

He also said that GRID Solar workers “are very courteous people, and don’t leave a mess behind.”

There were also members of the California Conservation Corp present.  ECM talked with Phil Lembke, who said that the CCC staff is enrolled through a program that teaches solar installation. The program runs out of the Cuyamaca College and they have installed some solar in East County Communities such as Lemon Grove. Their field days are done in the community doing this work, and getting the work experience in the solar field.

ECM also talked to Ulises Dominguez, who expects to graduate from High School and go on to College. He is in the middle of an internship with GRID.  While he expects to go to college to get a business degree at the San Diego Christian College (currently in El Cajon, soon to move to Santee), right now he is getting hands on experience in the solar business.

The East County student concluded, “I am learning a lot.”