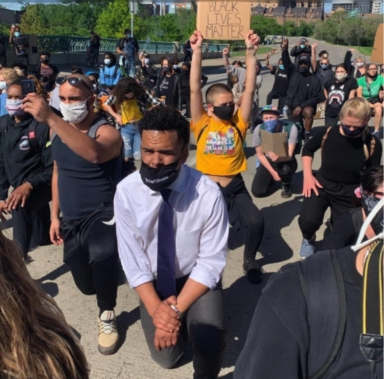 Photo, left:  Rev. Shane Harris during George Floyd march on bridge in Minnesota in late May

June 18, 2020 (San Diego) – Rev. Shane Harris, president of the People’s Alliance for Justice, spent two weeks in quarantine battling COVID-19.  Today, the nationally known civil rights leader based in San Diego announced he has tested negative and is returning to the public to lead multiple reforms ad proposals on inequalities in policing, racial justice and COVID-19.

"I am thankful to God and all the people that have been praying for me and supporting me through this process,” Rev. Harris states. “I want to commend Makeda Dreadenexecutive director of the world beat center for putting me on a vegan diet which helped keep inflammation down and served me three meals a day during my 14-day quarantine.”  He says he also worked out, took several vitamins and prayed a lot.

On the issues he plans to tackle next, he says, I am inspired by the protests around George Floyd's death and God knows we need real change now to address racial justice and inequities that have plagued the black community and other minorities for a long time, however I also highly encourage all protesters to get tested for COVID-19, to socially distance and to wear a mask because it can save a life. We must continue to make sure that our county Government provides adequate testing and healthcare to all residents so that we can slow the spread and save as many lives as possible and I will continue to fight for more adequate testing in our county's urban centers/communities.”

In addition, as he readies to rejoin public protests, he notes, “I am more clear than ever because of how long I've been fighting for racial justice that we must turn demonstration into legislation. We need to turn the protest into progress by circulating money in our communities to support black businesses who were left out of relief funding by our federal government; we need swift police reforms and accountability within our own county, and we need long term support from our allies--not just a march,but to stand with us all the way through. The time is nowand the pulse is right and I look forward to returning physically here in my own city to help lead that charge for real reforms in light of the killing of George Floyd. I have work to do."

Shortly before learning that he had COVID-19, Rev. Harris had traveled to Minneapolis to meet with the family or George Floyd and deliver financial support, also leading marches and protests there calling for the police officers who killed Floyd to be fired. They later were fired and now face charges ranging from second degree murder to abetting murder. An autopsy determined that Floyd had COVID-19 but was asymptomatic at the time of his death, when a police officer knelt on Floyd’s neck for nearly nine minutes.

Harris was diagnosed with the coronavirus after hereturned from Minnesota and began feeling ill during a news conference in La Mesa that was attended by elected officials and community leaders. Floyd wore a mask and maintained social distancing. The People’s Alliance for Justice indicates that other speakers at the press conference tested negative for the virus.

Harris released his medical test to media to document that he has now tested negative for COVID-19 and says he has been cleared by Dr. Matthew Dickinson to return to his work as an activist. 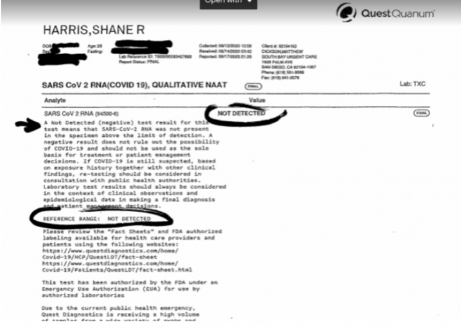 He spent his quarantine working on policy reforms for police accountability in California and San Diego, as well as virtually coordinating volunteers on the organization's COVID-19 task force, which helps homebound seniors and others.