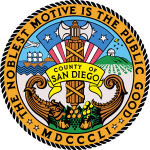 From Jan. 30 through April 15, hundreds of volunteers and college students will file income taxes for free at nearly 100 sites across the County. They will also screen families to determine if they qualify for CalFresh benefits. Residents can call 2-1-1 for more information.

About $70 million EITC dollars are unclaimed by local residents each year, according to a 2010 report by the New America Foundation. Nationally, the IRS estimates between 20 and 25 percent of eligible individuals do not claim their credit.

The Board of Supervisors launched the local EITC program in 2003, led by Chairman Cox. The program provides tax preparation assistance to low-income individuals and families.

In 2012, more than 46,000 federal and state returns were filed by EITC campaign volunteers, bringing $48 million to working families and the local economy. More than $10 million were EITC dollars.

Students from San Diego State University, Cal State San Marcos and Southwestern College will participate in the Thrive San Diego component of the EITC campaign and screen people at 18 tax-preparation sites to see if they may qualify for CalFresh benefits.  Last year, students screened 1,343 families and individuals for CalFresh eligibility; more than 900 potentially qualified to receive benefits.

Established in 1975, EITC is the federal government’s largest cash assistance program designed to lift low-income families and individuals out of poverty.

I can't remember? Did we ever win that "war on poverity"?