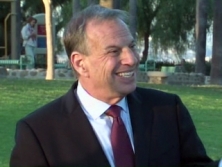 By Nadin and Tom Abbott

August 2, 2013 (San Diego)— Amid mounting sexual harassment accusations against Mayor Bob Filner, including a civil lawsuit, on Wednesday Filner’s lawyer tried to place all the blame on the City of San Diego. In a letter to the City, attorney Harvey C. Berger wrote, “The City has a legal obligation to provide sexual harassment training to all management level employees within six months of hire.”

He also claimed in the letter that the “trainer for the City unilaterally cancelled and never rescheduled such training for the Mayor.”  http://media.10news.com/image/Harvey_Berger_letter.pdf

But later, Voice of San Diego revealed, “Former city Chief Operating Officer Jay Goldstone said Filner’s office canceled several training sessions, which would have covered payroll, benefits and other employee and management roles and responsibilities, because the mayor’s office said it didn’t have time for them.” http://voiceofsandiego.org/2013/07/31/sources-mayors-office-canceled-harassment-related-training-sessions/

So we decided to look a little deeper, and what we found was highly problematic.

First off, Mayor Filner is not new in the political world. He started his foray into the U.S. Congress while working for Congressman Jim Bates. Bates’ term in Congress ended in 1990, when he was defeated by Randy Duke Cunningham.

The reason Bates lost his seat? Sexual harassment claims, which Cunningham made a campaign issue. Bates was the first member of Congress to be disciplined for sexual harassment.  No less than 20 staffers and former staffers claimed Bates threw tantrums, asked women for daily hugs, patted their buttocks, gaped and and commented on their breasts, the women told Roll Call in anonymous interviews.

Their stories are similar to the claims made by numerous women against Filner—and make it incredible to conceive that Filner was not aware that such actions could land an elected official in a heap of trouble:  http://www.utsandiego.com/news/2013/Jul/28/tp-the-case-of-rep-jim-bates/

Cunningham wrested the seat away from Bates by 1%, promising he was going to be a “Congressman you could be proud of,” (a boast that trips our irony meter, given Cunningham’s later conviction on bribery charges.)

It gets worse. When Filner was elected to Congress he voted for H.R. 1, the Congressional Accountability Act of 1995. This bill became law, and among other things, it created the Office of Compliance. http://www.compliance.gov/publications/caa-overview/

The Act brought many laws applied in the private sector to Congress. Among them, section 201 explicitly forbid sexual harassment. It gave staff the ability to report anybody engaging in this activity.  Congressman Alcee Hastings of Florida is actually going to face a Court of Law over similar allegations:  http://www.examiner.com/article/rep-alcee-hastings-sex-harassment-case-to-proceed-rules-judge

You can go check the rules yourself, though we recommend the handbook. The actual bill is a tad on the heavy reading side. From the handbook, we find the following:

◆ The law prohibits sexual harassment in the workplace

We would expect a  Mayor and former Congressman who had seen the person he worked for driven out of office based on sexual harassment findings, and who later voted yes for a law that forbade this behavior in Congress, to know better.

No women filed formal complaints against Filner during his tenure in Congress, though years later some have alleged improprieties. However the resolution process within the Office of Compliance is very short, giving claims only 180 days to be filed. From there is a set resolution process, with a court of law being the last choice, and in that case it is federal court.

We also found, while searching the site, that the Office of Compliance puts newsletters out regularly, explaining the laws in simple English. This is the latest regarding sexual harassment in the Employment Law Series, albeit published long after Filner left Congress: http://www.compliance.gov/wp-content/uploads/2012/09/Newsletter-for-Staff.pdf

The title states clearly, “HARASSMENT IS PROHIBITED IN THE CONGRESSIONAL WORKPLACE.” It also applies to both employees and employers. Filner would fall in the latter category.

It also has a very specific opening paragraph: “Unlawful harassment is a form of discrimination involving verbal, physical, or visual conduct of an offensive and discriminatory nature. Harassment is one of the most common claims made by Congressional employees when filing cases of discrimination with the Office of Compliance (OOC).”

This leaves us with more questions than answers.

We have contacted the Office of Compliance with a very specific question: Did then-Congressman Filner have to receive any training on this subject while serving the people of San Diego in Congress? As of now we have not gotten any definite answer on whether Congressional members are required to take this training, or how often.

ECM also contacted San Diego State University, since Filner was a professor of history in the 1980s and early ‘90s, before he was elected to Congress. The University has a policy that is given to every new employee these days. But SDSU lacks information as to what the policy was way back then.

We did get an answer e-mailed from Jessica Rentto at San Diego State University, who said there are no records of what training if any Congressman Filner took. According to Rentto, “ We no longer have any files relating to Bob Filner or trainings that were completed during his employment with us.”

SDSU is bound by Assembly Bill 1825, as are state agencies.  In California, as of 2004 due to AB 1825, any company larger than 50 employees is required to give this training. Under this bill, this includes government agencies and state government:  “The bill would require the state to incorporate this training into the 80 hours of training provided to all new supervisory employees, using existing resources.”http://www.leginfo.ca.gov/pub/03-04/bill/asm/ab_1801-1850/ab_1825_bill_20040930_chaptered.html

This requirement started as of 2005.  Filner previously served on the San Diego City Council—before this law was passed, and apparently has not had the training since taking the helm as Mayor. This is the basis of the claim by Filner's lawyer.

But while it may be true that he hasn’t undergone formal training on sexual harassment here in San Diego, he certainly had a first-hand lesson on the problems sexual harassment can create for both victims and elected officials found to have engaged in the behavior when his former boss in Congress lost his seat in similar circumstances.

Granted, Mayor Filner has not been found guilty of harassment as of now.  But he has been accused by nine different women.  Plus he admitted to disrespectful and intimidating behavior towards women sufficiently serious to persuade him to check himself into a rehab program as an in-patient for therapy.

To contend that Filner was unaware that sexual harassment is illegal, or that he didn’t know that forced kisses or asking a staff woman to work without underwear are inappropriate (if such claims prove true), stretches credulity to the breaking point.

"Raise credibility doubts"?  (Isn't that a bit of an understatement?)