2009 is the inaugural growing season for the Helix Charter High School chapter of Mustaches for Kids. Teachers at Helix will be growing mustaches from November 16 -December 18 while soliciting donations for their "courage and handsomeness" according to a press release. 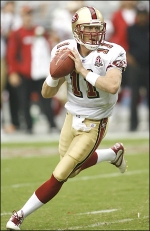 All proceeds will benefit the Alex Smith Foundation and its goal of helping foster children as they transition into college and adulthood. Alex Smith, Helix alumnus and San Francisco 49ers quarterback, is supporting the cause by growing a mustache of his own.

The fundraiser kicks off with "Clean Shave Day", Monday, November 16, at 3:30 pm. Participants will gather at the Riviera Supper Club to start the "growing season" by shaving for a clean start. The Riviera Supper Club is located at 7777 University Ave., in La Mesa. Fifteen percent of their food and drink sales will be donated to The Alex Smith Foundation.

Donations can be made at http://mustachesforkidshelix.schools.officelive.com/default.aspx.

Hey that was a good idea to raise money guys, keep the good work :)

Plus coverage of last week's game in our East County Sports section:  http://www.eastcountymagazine.org/node/2245