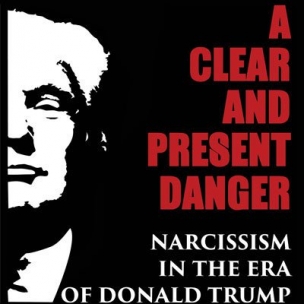 Reprinted with permission from The Moderate Voice, a member of the San Diego Online News Network

January 22, 2017 (San Diego's East County) - A Clear and Present Danger: Narcissim in the Era of Donald Trump was written before the election — but boy is it needed to be read now.

It’s a thoughtful volume comprised of contributions by psychiatrists, doctors, psychologists– and a notable storyteller-author-clinical-psychologist that’ll be read for many years and deserves to be read and studied. Because there is a history of narcissism in world history and politics. And in world history, leaders who fit the definition of having narcissistic personality disorder often don’t often fare well — and their countries may fare worse. One thing they do: they backhand societal and political norms, often get away with it and can change their societies, often little by little, sometimes abruptly — and often legally.

You could now say Donald Trump is a narcissistic leader in a Viva Yo narcissistic century and country: after all, this is a century where many people post countless grinning selfies and some (including me) put photos of what they ate for lunch on Facebook. Anyone with a camera also can create their very own YouTube channel and smugly appear in videos. Deep down, youknow you’re a star. Now you can re-affirm this certainty via social media you put up yourself, without having to jump through hoops held up last century by pesky editors, casting agents, producers, etc.

But Donald Trump is an extremely serious subject — a man who will lead the country and control the levers of Big Power that come with being voted into the Oval Office in a time of hyper-partisanship, when a key characteristic of our politics is unfettered hypocrisy. Long-held principles are quickly — and shamelessly — discarded to help a political tribe attain and cling to power.

The U.S. has become a narcissistic society, but A Clear and Present Danger: Narcissism in the Era of Donald Trump focuses on the issue of narcissists who become politicians. They can be highly seductive, help transform minds by the use of a repeated lie stream so steady and whopping that they are almost impossible to all refute. They paint themselves as someone who’ll save the nation and become almost Gods as they carefully inspire and/or work to create a cult of personality.

One author notes that a political narcissist will discard a person who is no longer useful “as Kleenex tissue full of mucus.” Since Trump’s election, we’ve seen signs of that and other traits described by this book’s many authors.

A Clear and Present Danger is organized into four basic sections: “Narcissism in the Era of Donald Trump” and one on “Personal Narcissism”, “Archetypal Narcissism”, and “Closing Thoughts.” This is an extremely serious book, not a quickly done medley of blog posts or tiresome partisan rants. You could re-title this Demagoguery for Dummies since it shows how Trump fits an archetype we’ve seen throughout history, and also explores how and why his followers will accept anything he asserts as truth (even when it is not), excitedly applaud him when he name-calls, and defend him when he repeatedly ignores norms (which do not stay norms unless they are vigorously kept in place). Expect our “givens” not to be so given. We’ve seen this already not just during the campaign but since his election win.

Above all, this is a serious, scholarly book written by serious authors. Some of the essays are easier to read than others. There are four standouts — and the two real standouts are the ones by Dr. Clarissa Pinkola Estés, who is known as “Dr. E,” and is The Moderate Voice’s Managing Editor. However, she is best known as an American poet, Jungian psychoanalyst, post-trauma recovery specialist, author and spoken word artist. Her book “Women Who Run With the Wolves” was on the New York Times’ best seller list for 144 weeks, and she has readers all over the world.

One stand out is an essay on Italian dictator Benito Mussolini: John McClain explores Italian fascism, noting that one slogan was “Make Italy Great Again.” Mussolini actually articulated a specific definition of Fascism (go here for a page with his quotes about fascism and democracy). In the case of Mussolini (who was one of German dictator Adolf Hitler’s role models), he notes that Mussolini was charismatic and how with narcissistic democracy-threatening leaders facts matter much less than their charisma and ability to create emotional connection. Mussolini was the youngest Prime Minister in Italian history, spawned the cult of Mussolini, and combined almost a mystical appeal to his followers combined with an appeal of extreme militarism.

In the end, one writer notes, the narcissistic leader’s slogan should be “My will be done.” Yet another standout is “Trumplestilskin,” by Dr. Leonard Cruz, which among other things notes how a narcissist can get themselves in trouble which ultimately leads to self-destruction.

Dr. Estes offers an essay that is compelling and highly unusual in concept and execution. The idea has been attempted since the book came out — but no one has done it as pointedly, clearly, and as well researched.

She does an entire chapter dealing with Trump without once mentioning his name.

Rather, she contrasts Hitler’s rise and fall with the rise and fall of the folk character Bluebeard. On the left side of the page, there’s a detailed, chronological account of Bluebeard’s rise and fall. On the left is a detailed parallel chronological account (clearly researched from many history books) on the rise and fall of Hitler. Immediately after Trump’s election, a California high school teacher was suspended for telling his class that there were historical parallels with the rise of Hitler and the rise of Trump. In fact, there ARE — as any number of books will show. Only Dr. Estes presents it so perfectly compact and detailed that the sense of deja vu is a strong one.

Indeed, a critically acclaimed new book, Hitler: Ascent, 1889-1939 by Volker Ullrich (to be reviewed here at a later date) bolsters Dr. Estés’ essay. Dr. Estes compresses the events and trends in a highly visual and readable form — one that will haunt you long after you put down the book.

Her approach graphically outlines seeming tactical similarities between Trump’s and Hitler’s rise and even some political techniques. You have to wonder reading her chapter: isn’t it weird how history creates such coincidences and patterns? Or are they coincidences?

But most attempts to parallel the way Hitler’ and Trump’s rise often fail. Why?

Other critical issues — how a political culture can drastically change with a charismatic political leader whose followers will jettison their previous values and the society’s values — get muddied in the linkages.

The name “Hitler” conjures up unimaginable (but now imaginable) brutality: before the German mass murderer blessed the world with his (timely) 1945 suicide, Hitler even had his beloved dog and her puppies all killed.

But if you strip out Hitler’s brutality the focus. the reality is: yes there are historic parallels . Narcissistic authoritarian leaders get into power by harnessing discontent– by making those who feel left out by their government or unhappy with the course of history, to instead feel they can have a voice or even turn back history. If only they’ll put all their trust in the infallible leader and blame it on some group.

Once in power, they begin to change or shatter norms. They test laws to the limits then — using as accomplices cowardly politicos or politicians that underrate them and or who feel that the worst can’t happen in their society. Thus they change actual laws, clamp down on institutions and individuals that could strongly challenge them. And a society is ‘transformed.’

At the end of the book there’s yet another essay by Dr. Estés that has now deservedly gone viral: “Letter to a Young Activist in Troubled Times” which starts out with these words:

“Do not lose heart. We were made for these times.”

FOOTNOTE: Several websites publishing critical news, opinion or analysis critical of Trump have been hacked and/or attacked over the past few months:

1) The publisher of A Clear and Present Danger: Narcissism in the Era of Donald Trump was hacked after the book was released. In an email to an author, an official of the publisher of this book, Chiron Press, gave these details.

“”Shortly after the release of A Clear and Present Danger book, our Voice Over Internet Protocol telephone system was corrupted so that all messages were diverted from our email account. Earlier our website was hacked by Russian hackers and we had to install much more secure systems to prevent future hacking. We cannot determine whether or not the telephone systems was also hacked using IP addresses originating in Russia.”

The publisher gave us permission to mention this hacking adding:

” I am reminded of lines from C. S. Lewis’s The Abolition of Man. In that book is an essay titled, “Men Without Chests” which closes with the following lines:

We make men without chests and expect of them virtue and enterprise.

We laugh at honour and are shocked to find traitors in our midst.

We castrate and bid the geldings be fruitful.

2. This website The Moderate Voice faced brutal hacking attempts and DoS attacks which repeatedly brought it down. The first was on Oct 7th, 2016, when TMV’s hits went down almost in a straight line and barely rose until after the election. After the election, TMV’s hits started to rise — and then TMV was attacked even worse. The Moderate Voice launched a fundraiser which helped pay for some extra security measures. At one point, Site Administrator, Tyrone Steels, said these were the most brutal DoS attacks and hacking attempts on the site in 10 years, noted that “site logs have shown 14,000+ attempts to access the administrative page with many different password combinations” during a very short time-frame.

3. The progressive website Democratic Underground was hacked and down for several days and they firmly believe it was political.

4. A Facebook friend who owns several blogs in a private message asked yours truly whether I had trouble with a “Russian bot” that was attacking his websites.

...I think this is better than Obummer trying to put in effect Saul David Alinsky's Communism.

will be astounded by someone calling him a communist,. They never knew!

I am tired of writing about Donald Trump, as I had earlier written a review of his book "Crippled America: How to make America Great Again" in this East County Magazine, and so many readers actually weighed in with their comments. Only time will tell just how great he will make America.

could be written about any president. The office is not customarily receptive to shrinking violets.