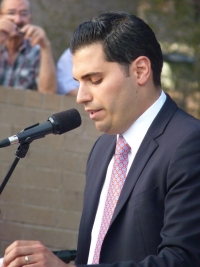 Arabo, a leading spokesperson for Iraqi Chaldean Americans in San Diego, is calling on the immediate release of these imprisoned Christians. He has organized a service outside of the Otay Detention Center (446  Alta Road, Suite 5400, San Diego) on July 30th from 4 to 5 p.m. in a last ditch plea to release these Christian survivors on Thursday. Clergy members will be leading the faith procession with a large congregation expected to also be present.

"There comes a time when we must say enough is enough,” Arabo said. “These Christians have survived ISIS, and the most unspeakable of crimes against humanity. Yet, our nation greets them from the gates of a prison. They have been imprisoned for months now, with no end in sight. We gather with our faith leaders today to join hands, and call for the immediate release of these 27 survivors.”