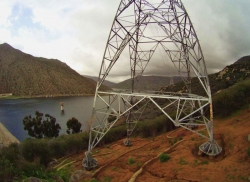 According to the Foundation, SDG&E’s project fails to assure that the state’s renewable energy mandate of 33% renewable by 2020 will be met; the project aims to increase energy project four-fold without proposing any reductions in dirty energy sources.

The Foundation also contends that the plan violates California Environmental Quality Act (CEQA) standards and asks that the key agencies, including the California Public Utilities Commission, U.S. Forest Service and others, delay  any consideration of the project until an adequate Environmental Impact Report (EIR) is prepared.  The EIR violates CEQA and obfuscates the true scope of the project, Cleveland National Forest Foundation, the group charged with protecting the forest for the public, contends.

The plan also fails to mention who would be served by a four-fold increase in power.

“Let’s be frank,” the Foundation’s letter states. “By adding energy transmission capacity, this Project will remove an obstacle to enable sprawl development both in and around the forest.”

The group also argues that the forest provides a great diversity of habitats that would be negatively impacted by the project.

This week, Cleveland National Forest announced the addition of 43 million acres granted tentative wilderness protection, a move environmentalists point to as indicative of the value of the forest as ecosystems – not conduits for power production.

Ironic, isn't it? Renewable power--geo-thermal, wind and solar--have done vastly more damage to the forest than any traditional power source.