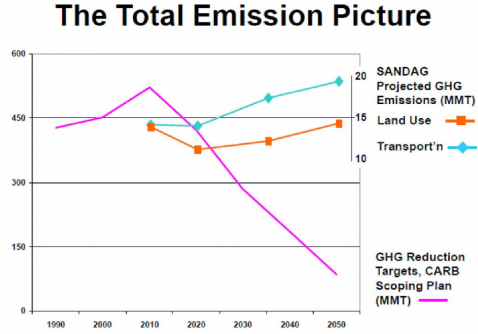 CNFF contends that instead of reducing greenhouse gas emissions by 2050, as state law requires, SANDAG’s plan will increase them by 700 percent (see chart).

San Diegans rely 95% on automobiles for transportation and only 3% on transit, yet SANDAG’s plan calls for more freeways instead of expanding transit in the near future.  San Diego also has the seventh worth ozone pollution in the nation as well as serious asthma issues, CNFF argues, yet SANDAG failed to provide a health impact analysis in its plan.

An appellate court and trial court agreed with plaintiffs that SANDAG failed to adequately address air pollution and climate change concerns, yet SANDAG voted 20 to 1 to appeal to the California Supreme Court.

Shu suggests that members of the public who believe SANDAG should fix its transportation plan instead of spending tax dollars on an appeal may wish to contact members of SANDAG.  SANDAG includes representatives of every city in the region as well as the county. Only Oceanside's representative voted against the appeal.

SANDAG contends that an appeal is necessary to clarify state law for planning entities.  For details, see our prior story:  http://www.eastcountymagazine.org/sandag-votes-appeal-transportation-plan-decision-state-supreme-court