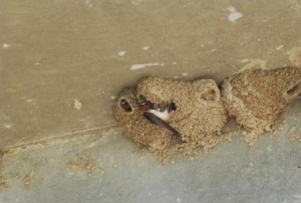 May 25, 2016 (Lakeside) --We've all heard of San Juan Capistrano's annual visitors, but do the swallows come back to San Diego as well? The answer is yes! Like their cousins from Capistrano, cliff swallows travel northward from South America each year to mate and nest. In doing so, they pass through our community and grace us with their chaotic, but beautiful nesting dance.

So what is it about San Diego? While you won't see them in tropical shirts or with sunscreen-covered beaks, the cliff swallows are not unlike the city's human tourists; they leave their home in the lower latitudes of South America and come to San Diego for its lovely, temperate climate. As an added bonus, they feast on gnats that also breed along bodies of water--in our case, that's the San Diego River.

In the absence of cliffs, the swallows sometimes place their muddy nests on the under sides of bridges as shown here under the Riverside Drive bridge in Lakeside along the San Diego River. 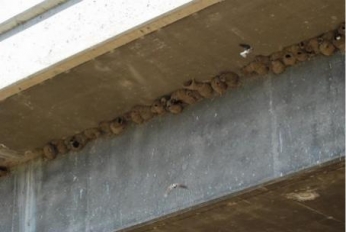 Sometimes, they may even choose to make their nests on the sides of tall, rough-walled buildings, including houses. Although they are excellent pest controllers, some residents would rather the swallows find a new spot. If swallows are nesting on the side of your house, be wary! Once a mother has laid her eggs, swallow nests are protected by California law and cannot be removed until empty. According to California game regulations, the nesting season takes place from February 15th to September 1st, so if you prefer to admire these creatures from afar, take preventative measures ahead of time.

That being said, the annual migration is a decidedly positive feature of our wonderful community! Swallow nesting is an incredible sight- hundreds of orange-necked birds dart overhead, snapping up flies and collecting the mud and sticks that will make up their family homes. Just last month, a lucky group of River Park golf cart tour guests was treated to a flight of nesting cliff swallows. As those guests learned, it is something better experienced than told about. There is still plenty of time to take a walk, a bike ride, or a tour and witness this magical piece of the River Park. Don't miss it!