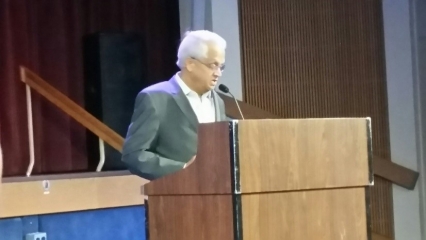 March 16, 2017 (San Diego) - On Monday, March 13, 2017, at the First United Methodist Church in Mission Valley, a panel composed of a climate scientist and representatives of the Jewish, Catholic, and Islamic faiths discussed climate change, each from their perspectives.

The evening began with Dr. V. Ramanathan's summary presentation of his climate science findings over the past 47 years. Dr. Ramanathan is a professor of atmospheric and climate sciences at the Scripps Institution of Oceanography. He also serves as a council member in Pope Francis’ Pontifical Academy of Sciences. In his presentation, he made the following points:

After Dr. Ramanthan’s presentation, the multicultural panel convened. Ms. Judy Ponizil, a member of the Citizens’ Climate Lobby and representing the Jewish faith tradition, said that her faith values learning, doing, and justice. We are partners with God, she continued, acting to protect the world, and acting to combat injustice of climate change consequences on the poor.

Father Emmett Farrell (retired) said that climate change is fundamentally a spiritual and moral issue. We must change our thinking to change our actions. As Pope Francis said: we are one family, living in one house.

Arwa Alkhawaja, a science teacher at the Islamic School of San Diego, said the Koran tells us to look upon the earth as its trustees. It is our duty to be good stewards of the planet.

In summary, the three representatives of religious faith agreed that climate change is real and we must address it. Dr. Ramanthan went on to say it’s commonly stated that GDP and economic growth are tied to CO2 emissions. However, California and Sweden, for two, have demonstrated that this isn’t true. The economies of both have grown while their CO2 emissions have substantially fallen. The switch to renewable energy is a growth market, and they both are proving this. All energy end uses must be converted to renewable energy, Dr. Ramanathan concluded, this is the path to our children’s better world.

James Long is an accountant for the City of San Diego. He lives in El Cajon with his wife, and looks forward to traveling more when he retires. James joined SD350 to do something for a future that is threatened by climate change. Working together with others is the way for him to have hope for that future.