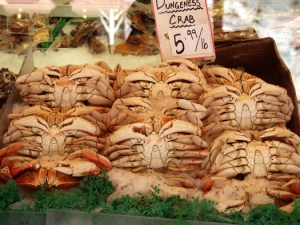 That's the subject of a Wednesday workshop in Sacramento on the findings of the West Coast Ocean Acidification and Hypoxia Science Panel. According to Jenn Phillips, project manager with the Ocean Protection Council – an arm of the state government that advises policymakers on marine science issues – the problem affects the entire west coast.

"They'll be talking about the panel's findings and what kind of implications this has for resource management and policy for California, Washington, Oregon and the province of British Columbia," she says.

Studies have shown much of the carbon dioxide released into the atmosphere eventually dissolves into seawater, making the ocean more acidic. Scientists believe this weakens some marine species – including corals, crabs and sponges – and is often accompanied by giant pools of low-oxygen water that drive away fish populations.

Phillips says these stressors can have a ripple effect.

"Acidification and hypoxia may affect one organism, but what does that then mean for the rest of the food chain?" she asks. "It can have really far-reaching, ecosystem-wide effects, especially when you layer this on top of a warming ocean, also from climate change."

She says the panel of scientists has been working for two years to come up with policy recommendations, to be released this fall.

The Wednesday workshop is free and open to the public, and will be streamed live on the web. It begins at 10 a.m. at the California Environmental Protection Agency office in Sacramento.