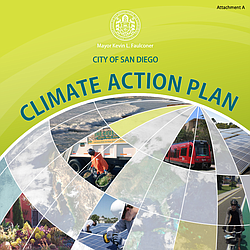 The plan would cut the city’s carbon emissions in half over the next 20 years. The full City Council will hear the Climate Action Plan at its December 15th meeting.

Mayor Kevin Faulconer said the action means "San Diego is one step closer to ensuring America’s Finest City becomes America’s Cleanest City as we work together to reduce pollution and create the green jobs of the future," KPBS reports.

Councilman Todd Gloria said the plan is consistent with a draft plan he released in 2014 while serving as interim mayor.

The plan calls for transitioning to have the city use only renewable energy over the next two decades through a community choice plan or similar alternative that would allow the city to buy electrical power from sources other than SDG&E.

It would also require building energy efficient and water efficient buildings, as well as promoting bicycling and walking. The plan includes specific goals, including cutting the number of San Diegans who commute by car from 87 percent to 50 percent, among those living within a half mile of transit stops.

The plan is legally binding, though Alvarez has called for a working group to monitor the city’s progress in meeting the Climate Action Plan’s ambitious goals, if approved by Council on December 15th.

Still to be determined is how the city would fully pay for the plan and assure that low-income neighborhoods do not bear a disproportionate share. The environmental committee asked staff to bring a funding and implementation plan back to council next spring.

In addition, Councilwoman Marti Emerald called for bringing a community choice plan to Council during the first phase of the plan, instead of phase two as drafted. SDG&E , in a letter to the city, claimed the report’s estimates of energy savings with community choice are inaccurate and insisting that natural gas powered plants are needed for grid stability.  The utility has announced it will form an independent marketing district that would enable it to lobby against community choice, bringing a heavy hitter into the battle over San Diego’s energy future.

In addition to bipartisan support of the Environmental Committee, the Climate Action Plan also has backing from environmental groups and labor unions who support creation of clean energy jobs.

Solar companies are growing very rapidly. Unions are about making sure Joe Nobody gets a decent income. A lot of smart people worked on the San Diego CAP, true. You would prefer that DUMB people worked on it? I can't even figure out where to begin with your last hysterical sentence. Deserttrek, calm down, start getting your stocks out of Natural Gas and other fossil fuels, and learn to adapt to the new world. Fossil Fuels are on the way out. Solar and Wind are the future. Unless we want to have no future!

another way for us to surrender control to the "smarter than the rest of us."

there is no such thing as a clean energy job , in fact over the long term solar provides LESS jobs. do some research regarding grid operation and stability along with the FERC requirements, then get back to us.
the unions are about money and the unions.

just like stealing from the taxpayers to fund the nfl, this is another example of the abuse of children, the elderly and the middle class to pay for the "smarter than the rest of us" dreams