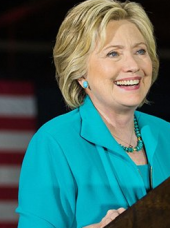 August 12, 2016 (Warren, Michigan) –Speaking at a  Futuramic aerospace factory in Warren, Michigan on Thursday where a new rocket to Mars is being built,  Democratic presidential nominee and former Secretary of State Hillary Clinton laid out a detailed plan to revitalize the American economy including a “manufacturing Renaissance” and policies aimed at helping working families, students, women, people of color, and themiddle class.  She also sharply criticized Republican rival Donald Trump’s economic plan for benefitting primarily wealthy individuals such as himself on the backs of working families.

Clinton claimed that Trump “hasn’t offered any credible solutions for the real economic challenges we face.”  A former senior advisor to former Republican presidential nominee John McCain estimated that Trump’s economic proposals “from cutting taxes for the wealthy and corporations, to starting a trade war with China,to deporting millions of hard-working immigrants” would result in loss of 3.4 million jobs while  the same analyst projects Clinton’s plan would create over 10 million jobs, Clinton noted.

She also  noted that Congressional gridlock has also blocked some reforms that she would work to push through to help the American people .

She urged voters to ask four questions: Which candidate has a real plan to create good paying jobs, which will restore fairness to our economy and ensure that those at the top pay their fair share of taxes, who will go to bat for working families, and who can bring people together to deliver results that will make a difference in people’s lives.

She then offered details on her own economic plans:

“Starting on day one, we will work with both parties to pass the biggest investment in new,good-paying jobs since World War II.  We will put Americans to work building and modernizing our roads,our bridges, our tunnels, our railways,our ports and our airports.”

Her plan includes repairing schools and failing water systems in neglected communities such as Flint Michigan, as well as bringing broadband high-speed Internet to every household in the U.S. by 2020 and investing in a “cleaner, more resilient power grid.” She called for a New Markets Tax Credit to create jobs in places left out, such as rural communities, Native American reservations and coal country.

“We are builders and we need to get back to building,” Clinton said, praising America for having the”most dynamic, productive workforce in the world” as well as the most innovative businesses, top colleges and universities, best science and technology and capacity for clean energy production.

She said no matter her dreams have taken her, ”I have always remembered, I’m the daughter of as mall business owner and the granddaughter of a factory worker—and proud of both.”

She laid out plans for “unleashing the power of the private sector to create more jobs at higher pay”  including an infrastructure bank and investment in “Make it in America” partnerships to support U.S.manufacturing and scientific research “that can create entire new industries.”

“patriotic tax code” that puts American jobs first. Under her plan,if a corporation wants to move overseas it would have to pay an ”exit tax.”

Echoing Bernie Sanders, she called for Wall Street, corporations and the super-rich to pay their share. She slammed Trump for seeking to roll back reforms on Wall Street and called for strengthening those rules to protect Main Street.  She also faulted Trump’s call to abolish the Consumer Financial Protection Bureau which has returned $11 billion to  25 million Americans ripped off by corporations.

She urged voters not to believe the “myth”that Trump is on the “side of the little guy” adding,”Not when he pledges to rip up basic rules that hold corporations accountable, when he wants to scrap regulations that stop polluters from poisoning the air our children breathe and the water we drink, let insurance companies write their own rules again.”

Clinton said Trump’s tax plan to cut taxes on big corporations, the wealthy and Wall Street would “explode our national debt” and force cuts in programs such as education, healthcare and environmental protection.

She also derided the”Trump loophole” that would giveTrump a “lower tax rate than millions of middle class families”and let Trump pay less than half the current tax rate on many of his companies. She also faulted his plan to eliminate the estate tax, which could save Trump $4 billion while 99.8 percent of Americans would not benefit.  Clinton said that that money would be better spent on helping veterans, children’s healthcare, or helping local law enforcement.

She slammed Trump for “stiffing small businesses from Atlantic City to Las Vegas,” recalling how important it was for her father, a printer who made drapery fabrics, to be paid promptly for his work. Clinton pledged to cut red tape and simplify tax filings for small businesses.

She said she will “fight to make college tuition free for the middle class and debt-free for everyone,” also providing relief for those who already owe student loans “so you don’t have to pay more than you can afford.  It’s just not right that Donald Trump can ignore his debts,but students and families can’t refinance their debt.”

She called for  policies to support more union training programs and tax credits for businesses to hire paid apprentices.

On trade deals, she noted, “too many companies lobbied for trade deals so they could sell products abroad, but then they instead moved abroad and sold back into the United States.”  She  promised to “stop any trade deal that kills jobs or holds down wages—including theTrans-Pacific Partnership (TPP).

She noted that Trump’s companies make products in China and Mexico.  She challenged  Trump’s claim that he can’t afford to make suits or ties in the U.S.,  revealing a website –hillaryclinton.com/make-it-here –listing 100 places in the U.S. already producing similar goods.

Her plan would “protect and expand” Social Security” and fight for equal pay for women, paid family leave, affordable childcare and raising the federal  minimum wage.  She that  Detroit’s early automakers understood that by paying their workers far more than other companies,  workers could afford to buy their cars.

She would create  for the first time a public option for healthcare that would establish in each state,”a choice of a public option health insurance plan that will help everybody afford coverage. It will strengthen competion and drive down costs.

She urged voters to look at who benefits from her economic plan versus Trump’s, “and you can then draw your own conclusion about values.”

Former DNC Chair Debbie Wasserman Schultz accidentally admits the truth ..."The work we did to prepare Hillary Clinton to be our nominee and then to make sure that we could get her elected president"....here.
Clinton's plan is to use public money to put people to work in the building and infrastructure improvement trades, while Trump's plan is to do that and to also reduce corporate taxes so that corporations would consider expanding manufacturing by bringing their funds back to the US where they can be invested. In other words Clinton is more of the same (she is establishment) while Trump is less of the same (he is not). . . . . Clinton being a chicken-hawk would also continue Obama's endless wars while starting new ones with Russia and China, while Trump has been critical of Clinton's hawkish behavior in Iraq, Syria and Libya. . . .Speaking of wars, Afghanistan is reverting to the Taliban but it is never mentioned. Afghanistan shook off Obama's 70,000 troop surge in 2009 and nobody seems to care. It's never mentioned.

...she was suppost to create when a Senator from Nu York?

What part of the 30,000 plus deleted emails do voters accept? The 1,000 or so that didn't include HIGH SECURITY THREATS? Or the many deaths of our Spy's? How about the over $200,000 of White House artifacts she stole? Is that who should run our country? Oh and even though it doesn't make much difference to her, what about ignoring the pleas for help from our ambassador and his staff? She and Obama both killed those 4. What part of that makes her the choice to run our country? She acts like nothing is wrong when in fact EVERYTHING IS WRONG ABOUT HER. Please do not believe anything she says. She is a pathological liar. I am sickened that she has not been brought to justice. I could list 40 more years of her failures and lies, but some voters just turn a blind eye. God help our country. And if Mr. Trump becomes president, he will help too. So he has said things brashly, but voters are against him? What the heck is wrong with Americans? Muslims are secretly invading our country so they will have the numbers to vote themselves into office. Then dear readers you can kiss your beautiful free nation goodbye. Please take heed. Thank you.

the same old song and dance .. put it to the middle class while crankles and her global controllers line thier pockets. she has said she will raise taxes on the middle class. send the old mare to the glue factory

We have been subjected to this DNC ballyhoo before. Once burned, twice shy.