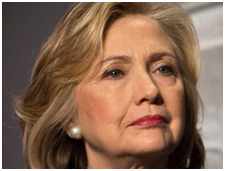 Meanwhile her husband, former President Bill Clinton, drew criticism for chatting privately with U.S. Attorney General Loretta Lynch last week while both were traveling through the same airport.  Lynch has since said she will step aside from making any decision in the investigation to avoid a perceived conflict of interest.

That leaves FBI director James Comey in charge of determining whether or not any federal charges will be filed against Mrs. Clinton, who kept a private e-mail server in her home and never used an official State Department e-mail address.  The key question is whether or not she knowingly sent any classified materials.

Pressure is mounting on the FBI to announce whether it will charge or clear Clinton, since the Democratic National Convention at which she is expected to be nominated is in late July.

Her opponent, Republican Donald Trump, has tweeted that it would be “impossible for the FBI not to recommend criminal charges against Hillary Clinton. What she did was wrong!”

But the FBI has never said whether Clinton herself is the target of its investigation, or possibly someone on her staff or others who may have sent classified documents.

If cleared before the convention,  Clinton would almost certainly secure the nomination, leading over Vermont Senator Bernie Sanders  in both pledged and super delegates as well as over Trump  in most national polls.  If charges are filed, then the potential remains for some super delegates to shift their votes.

If no outcome is announced by the FBI, then a cloud of uncertainty will continue to dog her candidacy potentially through the November election.