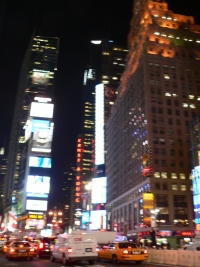 New York’s former Senator Hillary Clinton won with 58% percent of the vote, picking up 139 delegates.  But Senator Bernie Sanders, who was raised in Brooklyn, got 42% and picked up 106 of the delegates.

On the Republican side, New York businessman Donald Trump scored a resounding victory with 60, winning 89 delegates. In second place, Ohio Governor John Kasich got 25% and earned 3 delegates.  Texas Senator Ted Cruz, with just 14.5%, was shut out of receiving any delegates.

The next primary contest is on April 26th, when five states will be casting votes, all in the northeast: Connecticut, Delaware, Maryland, Pennsylvania, and Rhode Island.