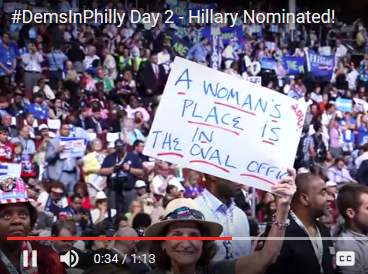 Democratic delegates also made history, shattering the glass ceiling as they nominated Hillary Clinton to be the first woman heading up a major party ticket for the presidency.

In opening remarks, a mayor talked about overcoming alcoholism, a singer/songwriter shared her story of seeking treatment for mental illness , and a star-studded stage of potential presidential candidates plotted a course for 2017.

Rev. Leah Daughtry, Democratic National Convention CEO, welcomed delegates to Philadelphia. “We as Democrats have a mission, a mandate and a responsibility to reach the least, the last, the lost, the locked in and the left behind. Our diversity is not our problem; it is our promise.”

Congressional member Linda Sanchez, the first Latina on the Judiciary Committee and the ranking member on the Ethics Committee and on the Benghazi Subcommittee, nominated Hillary Clinton for the office of President of the United States, which passed during Tuesday’s roll call, making Clinton the first female nominee of a major U.S. political party for President.

Linda Sanchez(not to be confused with her sister Congressional member Loretta Sanchez, who is running against Kamala Harris to succeed Senator Barbara Boxer in 2016), told a tear-wrenching story about a children’s football team chanting to the other predominantly Latino children: “Build that fence.”

New Hampshire Senator Jeanne Shaheen called for an end to the era of mass incarceration, adding, “We need a president who listens, who learns, who has empathy and who wants the same opportunities for all children that she’s had, who wants an America where we go forward together.”

Comedian turned Senator Al Franken gave a stand-up routine satirizing Trump’s business acumen and ethics. Pennsylvania Senator Bob Casey said “Donald Trump doesn’t make anything in America but a buck off of working people” and then went down a list of where Trump sources his products overseas.

New Jersey Senator Cory Booker and First Lady Michelle Obama gave arguably the best delivered speeches, with Booker saying “you cannot love your country without loving your countrymen and countrywomen” and “when we are indivisible we are invincible.”

Michelle Obama remarked, “I wake up every morning in a house that was built by slaves. And I watch my daughters, two beautiful, intelligent, black young women, playing with their dogs on the White House lawn. And because of Hillary Clinton, my daughters and all our sons and daughters now take for granted that a woman can be president of the United States.”

Senator Elizabeth Warren, most controversial for her call to break up banks that are too big to fail, said, “Now I’m not one who believes that Democrats are always right and Republicans are always wrong. There is enough blame to go around. But there is a huge difference between the people fighting for a level playing field and people fighting to keep the system rigged.”

Senator Bernie Sanders, who has officially endorsed Hillary Clinton, stated, “It is no secret that Hillary Clinton and I disagree on a number of things. That is what this campaign was about; that is what democracy is about [but] Hillary Clinton will be an outstanding President and I am proud to stand with her tonight.”

Tuesday’s speeches included a number of mothers who have lost children, including the mother of Trayvon Martin, followed by Andra Day singing “Rise Up” and a speech by former President Bill Clinton, who said of his wife, “this woman has never been satisfied with the status quo in anything, she always wants to move the ball forward.”

Following a roll call vote in which Clinton officially secured enough votes for the nomination, Vermont voted last—with Senator Sanders moved to suspend procedural rules and  in a spirit of unity, nominated Hillary Clinton by acclamation as the presidential candidate of the Democratic party.

After securing the nomination,  Clinton tweeted, “"If there are any little girls out there watching...I may become the first woman president, but one of you might be next."