June 18, 2014 (La Mesa)- An overflow crowd filled Council Chambers and spilled outside at last night’s La Mesa Planning Commission meeting on the controversial Park Station project, a multi-use development proposed at Baltimore and Nebo Drive.  Kitzman, the developer, has scaled down original plans from 18 stories to 11, still well over double the height limit for the area. The 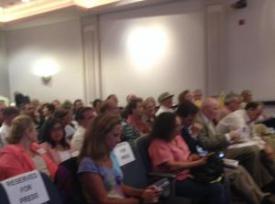 new plan also eliminates a park and makes other changes.

Testimony ran on for over to four hours, with 23 speakers opposed and 26 in favor (most from outside La Mesa).  The evening ended with a shocker, when Lenny Guccione, business manager for the American Legion – the project’s co-applicant-- criticized the project as “too big” for the neighborhood, then abruptly announced withdrawal of the American Legion’s support and walked out.

The announcement stunned planners and project  backers.  A recess was swiftly called, after which Sherman Harmer with Urban Housing Partners admitted the American Legion’s withdrawal came as a “total shock” to the applicant.

The Planning Commission voted 7-0 to close the public hearing and end public input on the project. Following  internal discussion and staff input, a new meeting was scheduled for Wednesday, July 16 at 7 p.m.

The developer, Kitzman, earlier had pulled out all the stops to woo community support, even offering free taco dinners to anyone who would testify in favor.

“I can say I have never seen this done before and it seems out of place,” City Manager Dave Witt told ECM when asked about this tactic.

Out of place is exactly how many La Mesa residents view the project.  Concerned citizens said would be out of scale for the community character, obstruct views and cause potential parking and traffic problems.   But supporters contend the transit-friendly development is needed, bringing housing, shopping and jobs to La Mesa—along with boosting sales and property tax revenues for the city by a million dollars or more.

Chair Dexter Levy asked Bill Chopyk, director of community development, to first go over the Environmental Impact Report (EIR). Chopyk explained, “If the EIR is approved, it would set development standards. “ The planning commission would have to consider whether the EIR addresses all environmental impacts and if it meets California Environmental Quality Act(CEQA) standards, and go over more of the specific plan.

Chris Jacobs, senior planner, showed photos of the site and gave a staff presesntation, wtih timeline. The Kitzman family submitted an application with American Legion as a co-applicant in 2008.  In October 2013  the description was revised and a public review for draft EIR circulated earlier this year. The initial plan was 500 dwelling units, 18 stories, 190 foot height, use of Nebo Drive for a linear park. Now the plan proposal is 80 dwelling units per acre, 61,000 square feet of commercial retail, and 146,000 square feet of commercial office. The height is down to 110 feet, 3.0 floor area ratio, and 1 parking space/dwelling unit plus guest parking for residents. Significant unavoidable environmental impacts are air quality and greenhouse gas emissions, and aesthetics.

Commissioner George Hawkins wanted clarification on the EIR impacts. “You said they could be mitigated,” he said, but staffer Jacobs made clear, “Some of the air quality greenhouse can be mitigated. Some cannot. In other issues, it cannot be mitigated.”

Commissioner Linda L. Keene wanted to know if this plan included any affordable housing. Jacobs told her it didn’t.

Project applicant spokesman Harmer (photo, right) from Urban Housing Partners was the first to speak in favor.  “It’s been an interesting 10 year process,” he said. “The most important to us was to create a walkable and inviting environment, where people want to go… We hope to start construction in two years.”

Lenette Hewitt from Urban Housing Partners spoke next. “Overt the last two years, we’ve had community outreach… The residents were very favorable of a new hotel in La Mesa… A number of people have signed up to live here,” she said, though it was unclear just how the developer could sign up residents based on a project still in the proposal stage.  “The biggest concern was crime. We heard over and over that the high rise was too tall, so it was reduced to a mid-rise building.”

Jacob Schwartz from Urban Housing continued the formal presentation in favor, stating that the new plan proposes “much more open space, much greater public gathering areas, is public oriented and invites the community.” To address crime, he said,  Urban Housing met with La Mesa Police. “There are crime prevention features, which include secured underground parking, territorial protection, lighting and cameras, secured buildings, and onsite maintenance personnel.” Schwartz claimed the mid-rise would be fine for the community character in keeping with a “small town feel.”

Levy wanted to know how this project would be ‘inviting’ to the public. Schwartz told him, “There are walking pathways. It creates curiosity.”

Mike Dunham from Urban Housing spoke about the traffic mitigation analysis, which include traffic improvements. There would be improvements to Baltimore Drive/University Street segment, which would be an extension of two left turn lanes from the I-8 ramp to Baltimore. Dunham clarified, “The intent was for 416 living units for apartments or condos, or 500 units for a hotel.”

Three members from the Kitzman family spoke in favor.

“Our family has lived, worked and developed in the city of La Mesa for over 100 years,” Frank Kitzman said. “We have other property here.”

Joseph Kitzman shared his thoughts. “My grandfather envisioned this as a legacy project. We came up with this specific plan. We’re hoping to continue to solicit community feedback and continue to research what we’re building there… We will see this through. We’re in this for the long haul.”

Mary England, president of the La Mesa Chamber of Commerce, spoke next as a citizen. “It gives a great opportunity for the city…to help generate some revenue. Expenses continue to go up. I’m interested in a community gathering place.”

Elyse Lowe from Move Alliance in San Diego said, “On average, San Diego spends 60% of their income on housing and transportation. This helps residents reduce costs. The project provides an exemplary example,” she stated, adding that it has a five minute walking access. “The project really takes La Mesa to the next level not only for this generation, but for generations to come.”

Kimberly McNeil, La Mesa resident, said she would want to see this project happen so her parents, who have been living in Florida, can visit her. “I live in a very old home.. I would support not only the condos but the hotel.”

Tom Perez who’s from the border said, “One of the reasons I come here is to go to Costco. I’d like more reasons to come here- more shopping, people to visit.”

The first to speak in opposition was La Mesa resident Nathan Cunningham. “I actually just purchased a house two years ago.. It has a small town feel.” He fears that if the project is built, traffic will increase and that one parking space per unit is inadequate if new residents decide to purchase a second car.  The plan “isn’t realistic,” he concluded.

Realtor and La Mesa resident, Laura Lothian, pointed out problems with Smart Corner in downtown San Diego, project that she said has “the same concept as Park Station.” She suggested the project would lower property values in the downtown village area.

Resident Bill Adams said, “Our existing plan is a good plan. It reflects our vision.” He urged the city to seek out other potential developers for the site.

Attorney Mike Pundiff shared his views. “I’ve lived in La Mesa for over 30 years. “ He noted that the project has two unavoidable impacts, adding, “The actual design of this project is unknown.” He also called the brochure “ misleading.”

La Mesa Spring Valley school district board member Bob Duff (photo, left) observed, “As a bicyclist, I find traffic on Baltimore is bad enough as it is.”

Mary Earnest, La Mesa resident, said, “I fully support the redevelopment of this area, but I have great reservation on the height.” She recommended that the project be modified to the current 46-feet height limit.  (Park Station has sought to be exempted from the height limit for the downtown village and have a plan specific to this single project created instead.)

Harmer, in his rebuttal to the American Legion’s surprising withdrawal of support, said the project applicant would need to speak with the American Legion further.  He acknowledged that the major issue voiced at the hearing “seems to be height. “We’re asking for a change on the east side of the property… [There are] opportunities for a hotel, potential for senior housing, and an office building. We need the height to make those buildings work… He added that the height doesn’t necessarily have to be 110 feet; it could be 100 feet.—though that would still be 54 feet above the current limit.

Vice Chair Harold Bailey asked Harmer for the differences between Smart Corner and Park Station. Harmer explained, “Park Station is a private project. Smart Corner was a public project, to relocate the San Diego commission, MTS commute…” Smart Corner is 19 stories and has one parking stall per bedroom.

Whether planners will recommend approval, modifications or rejection of the towering structure close to the historic century-old downtown district remains to be seen.  Ultimately, La Mesa’s City Council will have the final say , however, on the Park Station project.

For more information on Smart Corner, go to: http://www.sandiegodowntown.com/san-diego-condos-developments/smart-corner-condos-san-diego/.

So, Kitzman's grandfather "envisioned this as a legacy project"? Legacy to whom, and at what cost to the rest of us? Looks like the Legion may turn out to be La Mesa's "local hero." Undoubtedly the Kitzmans offered them a king's ransom to pull-up stakes and relocate. Instead, they're doing what's right for the community. If the Kitzman's want to leave a truly valuable, lasting legacy, they should think less about themselves and, following the Legion's lead, consider what's right for the community around them.