By Nadin Abbott
Photos by Nadin Abbott
July 10, 2012 (San Diego)-- The mood at the Civic Center was defiant. On July 7, the marchers were getting ready to take to the streets once again. They were protesting the Trans Pacific Trade Negotiations (TPP) happening at the Bayfront Hilton Hotel.
Among them was Kathy Mack-Burton, a resident of La Mesa, who told me that she was, “interested in stopping this secret negotiation that is not in 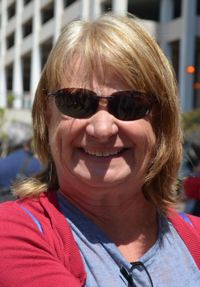 the interest of the American people.” This treaty will come to a surrender of our sovereignty, she believes. The Finance Chapter that was leaked to Public Citizen has found arbitration that will indeed move away from regular court systems, so this fear is not unfounded. http://www.citizen.org/trade/
She was not alone. According to Kim-Holmgrin of the Green Party, “The TPP pushes advantages away from the common person and expands corporate power. It even weakens our sovereignty.” He added that the Greens are also “really concerned about environmental and global warming,” and that the tribunals will be a violation of International Environmental treaties. Labor is at risk as well, with the weakening of labor standards.
According to supporters of Free Trade Agreements, (FTA’s) these treaties lead to the opening of markets and opportunities. And while there are clear winners and losers, in the end the consumer ends with cheaper products. According to the U.S. Chamber of Commerce this translates to about $10,000 in savings annually to the average household.
Also, according to the US Chamber of Commerce, support of FTA’s leads directly to American jobs. to the tune of 38 million jobs.  In fact, according to the Chamber, one in three manufacturing American jobs depends on these agreements.
But others view FTAs, and particularly TTP, as a threat to American prosperity. 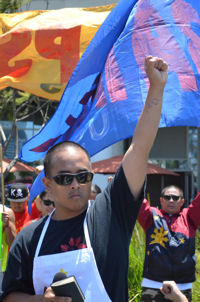 Ivan Penetrante of Bayan USA, an alliance of Progressive Filipino groups in the United States,  says the TTP is “NAFTA on steroids. It is a treaty of the global 1%.”
He suggests that it is no coincidence that the U.S. government is pivoting its armed forces to the Pacific.  It is not just about China and containing China, but about making sure this treaty can be enforced, he believes. Penetrante later alluded to the fact that there are armed uprisings in the Philippines, just like the Zapatista uprising in Chiapas after NAFTA came to be.
This treaty “will oppress 60% of the world's people, who live in the Pacific Rim,” he said.
Opponents suggest that the people will fight this, by any means necessary.  The also denounce the secrecy of the negotiations. 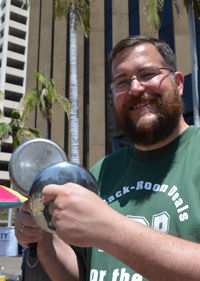 According to Arthur Stamoulis of the Citizens Trade Campaign, what is needed is to “drag the TPP out of the shadows. Six hundred Corporate lawyers have access (to the treaty), while our representatives are denied access.”
We know that Senator Ron Wyden (D-OR) was denied access, when he asked for it from the Office of Trade Representative. Senator Wyden said this in the Well of the Senate back in May: “If agreed to, TPP will set the tone for our nation’s economic future for years to come, impacting the way Congress intervenes and acts on behalf of the American people it represents.”

It may be the U.S. Trade Representative’s (USTR) current job to negotiate trade agreements on behalf of the United States, but Article 1 Section 8 of the U.S. Constitution gives Congress – not the USTR or any other member of the Executive Branch – the responsibility of regulating foreign commerce, Senator Wyden observed. “ It was our Founding Fathers’ intention to ensure that the laws and policies that govern the American people take into account the interests of all the American people, not just a privileged few.”

http://www.wyden.senate.gov/news/blog/post/iycmi-wyden-statement-introducing-congressional-oversight-over-trade-negotiations-act
According to Stamoulis the fact that elected officials have been denied access, but lobbyists are free to have input, should worry all of us.
March and rally
Once the march started, groups formed in ranks by their different organizations. They made their way to the Horton Plaza Shopping Center, and walked through the center chanting all the way, to the curious looks of bystanders. Some bystanders were given fliers explaining what this was about. Once they reached the Convention center they marched down the street to the Bayfront where a rally was held.
Jane Kiesley, an activist who came all the way from New Zealand, spoke to the assembled group. “You know about NAFTA. TPP is for the most part a license for U.S. companies to plunder our country,” she warned. “This  is a bill of rights for foreign companies. They got a right to sue in secret offshore tribunals.”
She told the audience how Phillip Morris is doing precisely this right now, since both New Zealand and Australia have started using clear labels in cigarettes. These lawsuits will lead to a “chilling effects if governments don’t do what corporations want.”
Kiesley also said that Mexico and Canada have signed on to the negations without checking the fine print. Some statements were followed by screams of “SHAME” from the crowd.
Kiesley also reminded people that there is a lot of resistance in all TPP countries. This is an attempt to take the power of the people away, and people  will not stand for it, she maintained.
Brother Hex from Occupy San Diego reminded people that nine months ago people came together, people who before this would never give the time of day to each other. He added, “Oppression lets the global corporations stay on the driver seat.”
Hex spoke on how humans realize what is at stake, but corporations do not. “A corporation fueled by capital can never understand these things.”  This (The TPP) needs to be stopped in its tracks, he said. He reminded the people that there is no more powerful a weapon than apathy. This is also driving people into a new form of slavery. There is now global dissent and it is, “time to rise…the time to be polite is over, they’re not listening.”
Enrique de la Cruz of the Colectivo Zapatista told the crowd that it is time to stop being nice. “Just call this what it is, Capitalism.” We need to continue the struggle, what we are fighting for. “We need to fight locally and link up with people around the world.” There is a great need to build bridges among communities he said. It is at the community level where we know what the needs are. He ended with a common chant in Mexico, “Zapata vive, la lucha vive.”
The  people present came from a broad spectrum of labor, family farmers, Occupy members and other progressive groups. This is no longer just an Occupy movement, as some may believe. Bridges are now being built, and getting stronger.