“We are the canaries in the coal mine. If this is not stopped here, destruction of millions of acres of public lands across the southwest will likely soon follow.” -- Terry Weiner, Desert Protective Council 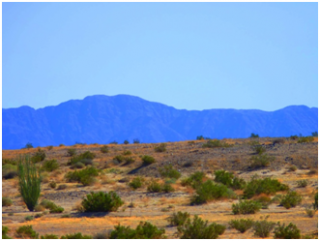 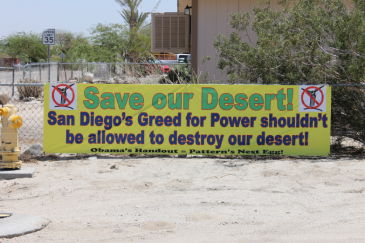 May 11, 2012 (Ocotillo) -- Secretary of the Interior Ken Salazar today signed the Record of Decision, giving a go-ahead for the contentious Ocotillo Express wind project.

“This industrial wind project is symbolic of what’s wrong with the current federal fast-tracking process,” Terry Weiner, Imperial County Projects Coordinator for the Desert Protective Council, said of the Ocotillo Wind Energy Facility (OWEF), the first big energy project in our region poised for destruction of public lands. “We are the canaries in the coal mine. If this is not stopped here, destruction of millions of acres of public lands across the southwest will likely soon follow.” 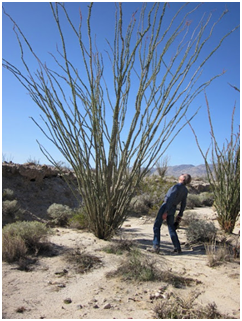 Imperial County’s Planning Commission and Board of Supervisors approved construction of the massive Ocotillo Wind Energy Facility (OWEF) by San Francisco-based Pattern Energy on 12,500 acres of desert surrounding the rural community of Ocotillo--despite compelling testimony and pleas by tribal members, residents and environmentalists to deny it.

Similar projects are in the pipeline on San Diego County’s scenic and cherished public lands, and others.

Industrialization of the 20 square miles of desert for the OWEF will cause irreparable impacts to fragile natural and Native American cultural resources, to the adjacent Anza-Borrego Desert State Park, to Ocotillo’s community character, quality of life and public health, opponents warn. The Bureau of Land Management (BLM)'s approval for the developer, Pattern Energy to have a right of way on previously protected land means  bulldozers could begin rolling within days.

The federal renewable energy policy, authorized under the George W. Bush administration and now being implemented under the Barack Obama administration, for the first time, allows formerly protected national forests and recreation areas to be opened up for development as energy corridors.  Additional remote solar and wind energy developments and long-distance transmission lines are in various stages of approval across America, including San Diego’s East County and Imperial County.

A new federal fast-track process intended to speed approvals of renewable energy projects has instead proved disastrous, shutting out parties with critical information and stifling voices of dissent.

“We believe that the Department of the Interior (DOI) is poised to violate the law and our rights to religious freedom and our cultural identities guaranteed by DOI’s own policies, the United States Constitution, and international declarations.  We need your help,” Anthony Pico, Chairman of the Viejas band of Kumeyaay Indians, wrote in a letter to President O

“This project will have devastating environmental consequences and cause irreparable harm to sensitive desert habitat, further endangering Peninsular Bighorn sheep, golden eagles and other wildlife,” said Ralph Singer, President of the Anza-Borrego Foundation. “Imagine 112 massive turbines, each 450 ft. tall -skyscraper height- with blades as large as a commercial jetliner wingspan. Yet impacts on Anza-Borrego Desert Park, which shares a 5-mile border with this project, were largely left out of the EIR.”

“I have done calculations on the wind speeds claimed and believe this project has relied on inflated numbers,” revealed Jim Pelley, an engineer and Ocotillo resident. “If true, then taxpayers are being defrauded and subsidies granted to Pattern Energy should be returned. I call on Congress to launch an investigation and on President Obama to order Interior Secretary Ken Salazar, who oversees the Bureau of Land Management, to halt this project pending outcome of a Congressional investigation with full public disclosure.” 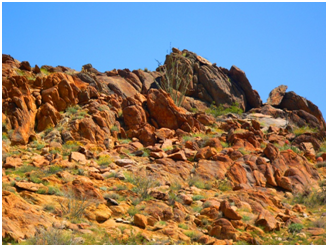 "The BLM and Imperial County get a big fat F for failing to uphold their legal and ethical duty to protect sensitive resources, public health and safety, and taxpayers from boondoggle projects like this,” said Donna Tisdale, Secretary for the Protect Our Communities Foundation.

There are safer, cleaner options for renewable energy and reduce greenhouse gas emissions. According to the California Public Utilities Commission, PG&E now pays less for moderate-sized rooftop solar power ($114/MWhr) than for wind energy ($118/MWhr).  PV solar is dropping to price parity or nearly so. Given the unreliability of the wind resource and vast hidden costs of wind energy’s harmful impacts, solar on roofs and parking lots in the already built environment is the cleaner, cheaper, more reliable option for the people of California.

Several organizations have indicated they are pursuing legal actions in hopes of halting the Ocotillo project. But the broader issue is the destruction of public lands soon to take place on a devastating national scale.

"These are our precious public lands that are being plundered for private profit by corporations including big energy companies.  The same industry that brought you the ENRON fiasco and Gulf oil spill is now implementing a massive takeover of our public lands," a press release issued by the group concluded.

In addition to imp 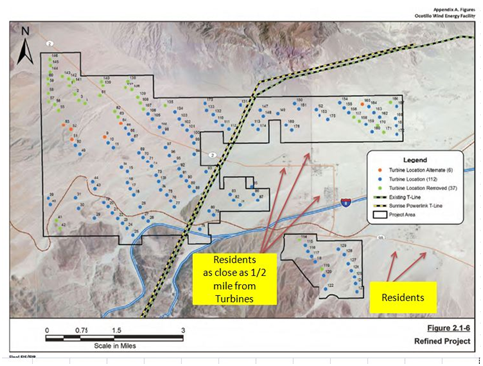 acts on public lands, the project also poses threats to residents of Ocotillo, where some homes will be surrounded on three sides by turbines less than half a mile away.

Serious health impacts are well documented around the world occurring at homes up to a mile or more from industrial wind turbines due to impacts of noise, infrasound, and stray voltage.

"These are our precious public lands that are being plundered for private profit by corporations including big energy companies.  The same industry that brought you the ENRON fiasco and Gulf oil spill is now implementing a massive takeover of our public lands," a press release issued by the group concluded.

True as far as it goes, but since these "green energy" companies don't--in fact, can't!--do anything they're not allowed to do--in this case, encouraged to do!--by our politicians, wouldn't it be more accurate to lay the blame where it really belongs: at progressive government's doorstep?

An ideologue is someone who, by definition, gives priority to ideas over reality. In this case, the idea with preferred political status consists of the (ludicrous) notion that we can significantly reduce carbon emissions by planting huge numbers of skyscraper-esque wind turbines over vast swaths of open land.

And the reality sacrificed?--hundreds of thousands of pristine wilderness acres, along with the flora and fauna that live there.

Oil companies as well as the wind industry.  Drilling in hard-to-access locations like deep waters off the gulf might not be viable without subsidies, same as the big wind projects in marginal wind areas.

Jim Pelley hit it right on the nose. Taxpayers are being defrauded and have been for decades. Subsidies granted to corporations are one of the primary reasons for the national debt. People should start looking at the debt problems in Greece, Spain,and Italy. The poor citizens in these countries were sold tens of thousands of these turbines while corporations ran off with their tax dollars.