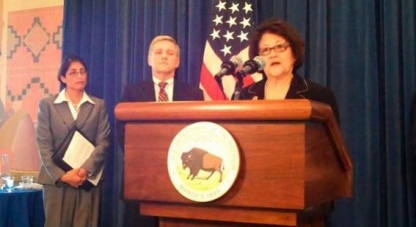 May 22, 2016 (Indian Country) -  The US Department of the Interior announced that it will expand and extend implementation of the land buy-back program mandated by the Cobell v Salazar Settlement, the largest class action lawsuit against the United States government in history.

Elouise Cobell sued the United States government to return the money owed to Native Americans from land taken in trust by the government.  As “trustee” of the land the U.S. Department of the Interior (DOI) was to care for and manage the land in a way that would benefit the individual landowner and the tribal community.  However, the land was then leased, the mineral rights sold and the trustee kept the money.

In 1985 Elouise Cobell argued that the U.S. government, acting as trustee, failed to keep an accounting of all the millions of dollars owed to individuals and their descendants.  She won.  But the DOI never complied with the court order to conduct an audit and provide an accounting.  She sued again in 1999.  She won again.

“This is our money,” Cobell said on C-Span.  “The money is there in the U.S. Treasury, collected but not appropriated.”  She added, “Politicians should not be managing our money. “

The Dawes Act of 1877 was part of the “assimilation” policy by the U.S., right after the extermination policy failed.  Assimilation brought the boarding school system of social engineering* and the “allotment” of reservation land.  Allotments were 160 acre parcels of reservation land parceled out to individual tribal members.  However the Indian allottees were considered incapable of managing his land so the Department of the Interior and the Bureau of Land Management (BLM) did it for them.  These agencies were horrible custodians of the land and the money. They allowed open pit mining, clear cutting timber and extreme extraction in the most pristine and beautiful places.  Reservations were plundered for their resources and the land is left wasted and scarred.

Cobell kept winning in the Supreme Court.  “I have seen families living in poverty with oil rigs in their backyards,” she said on C-Span in 2006.  By then the estimated amount owed the Indians was over $100 billion.  “We are suing for an accounting,” she maintained. “This is not about damages.”

After 14 years, the case was settled for $3.4 billion in 2009, with $1.4 billion going to the plaintiffs and $2 billion allocated to repurchase land that was distributed under the Dawes Act and return it to communal tribal ownership.

The Land Buy-Back Program for Tribal Nations was established to implement the land consolidation component of the Cobell settlement.  A Consolidation Fund of $1.9 billion has been made available to the U.S. Department of the Interior to acquire fractional interests in trust or restricted land from individuals who are willing to sell their interests for fair market value within 10 years.  Only a fraction of the fund, $740 million, has been spent because of the time it takes to appraise property and sort out the complexities of ownership.

As soon as land is acquired, it is restored to tribal trust ownership for uses benefiting the reservation community and tribal members.

*Children as young as five were taken from their families, taught Christianity and punished for speaking their own language.  The Carlisle Indian School in Pennsylvania, founded by Captain Richard Henry Pratt in 1879, was the model. Pratt was a leading proponent of assimilation through education policy believing that Indian ways were inferior to those of whites, he subscribed to the principle, "kill the Indian and save the man."

Author’s Footnote:  I am Chippewa, the descendant of two allottees in Minnesota.  I immediately relinquished my personal ownership share in two 160 acre parcels.  My ownership is fractionalized between my mother, sisters, cousins, uncles, nieces, nephews and grandparents.   The total compensation is yet to be determined.  Reservation land has nearly tripled and over 1.5 million acres of land has been restored to tribal ownership.  Elouise Cobell has joined her ancestors.  She is in the hearts of those who honor justice.

by European newcomers on the land they had inhabited for hundreds of generations, and kudos to Elouise Cobel, one person who made a difference in the County of San Diego which has more Indian reservations (~18) than any other county in the United States.