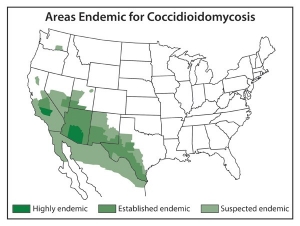 National and regional experts presented 25 papers and 13 poster displays to an audience of about 160. Subjects included the spread of Valley Fever to Washington state and northern Arizona, the dual challenge of asthma and Valley Fever; steroid treatment for cocci meningitis, skin test screening on California inmates; and Valley Fever’s effect on  solar farm workers and canines.

By far, one of the most interesting—and disturbing—reports dealt with the solar industry.

Gail Sondermeyer, an epidemiologist at the California Department of Public Health, discussed 44 Valley Fever cases among equipment operators, laborers and other personnel during the 2011-2014 construction of two solar farms in San Luis Obispo County. Interestingly, one-third of the cases developed in employees not involved with “dust level” work, such as electricians. (San Luis Obispo County’s rate of cocci is 38.4 per 100,000 persons.)

Sondermeyer’s report was based on a joint CDC/CDPH investigation in August 2014.  Most of the solar employees did not use respiratory masks, and Cal/OSHA cited employers for prevention lapses such as the lack of a respiratory protection program. Recommendations to employers included limiting dust exposure,  increased watering of exposed areas, providing HEPA-filtered air-conditioned cabs for driver-operators, and using NIOSH-approved (National Institute for Occupational Safety and Health/CDC) respiratory gear.

When asked about California’s proposed high speed railway and its potential for cocci disruption, Sondermeyer replied that she had no information at present on recommendations.

Another solar study also targeted cocci. Researchers at California State University Bakersfield and the Los Angeles County Department of Public Health displayed a poster verifying the presence of cocci at six proposed sites for photovoltaic plants in Lancaster (Los Angeles County). The researchers collected soil samples and used DNA/PCR testing. Their conclusion was the fungus was found at the sites and “presents a potential danger to those working on constructing the solar panels, as well as the community members living in the area.”

Experts also weighed in on Spherusol, the new cocci skin test offered by Nielsen BioSciences, a biotech company in San Diego. Spherusol was recently used to “risk stratify” around 36,000 inmates in the 33 mens’ prisons in California.

The purpose was to further reduce the number of high-risk-for-cocci-infection prisoners housed in 10 institutions in endemic areas, such as Pleasant Valley and Avenal State Prisons. Public health officials have already excluded immuno-suppressed individuals from these prisons as well as African-American and Filipino prisoners, but wanted to find out which prisoners had already been infected and thus immune to acquiring new infection.

Gail Sondermeyer said that of the 36,000 inmates tested, only 8 percent or 3,169 prisoners with known histories of exposure to cocci tested positive for the fungus. Prior estimates had shown that Spherusol would identify 13 percent. “It’s not immediately explainable,” says Sondermeyer, noting the discrepancy in positive identification.

According to John Galgiani, MD, director of the Valley Fever Center for Excellence in Tucson, Arizona, Spherusol by itself is not a “convenient one-stop test for diagnosis.” Physicians must also use blood testing and CT scans that can detect lung nodules. The consensus was that Spherusol hypersensitivity in individuals tends to be problematic (despite the removal of the preservative thimerosal) and needs to be tested in a general population with unknown exposure to cocci. On the other hand Galgiani still recommends health practitioners in Phoenix and Tucson should add it to their diagnostic tool kit.

Spherusol could also be used on dogs, too, since Valley Fever also heavily victimizes canines. According to the VFCE at the University of Arizona, the disease costs Arizona dog owners at least $60 million a year, with some dogs not surviving treatment. Veterinarian Sharon Grayzel studied more than 100 dogs in California, especially those on the southern coast and central valley and found that younger dogs, those that dig, and Vizslas, Greyhounds and Dalmatians are breeds at increased risk.

One of the worst outcomes of disseminated cocci in canines is the high percentage of dogs that develop kidney problems. In a retrospective study (1990-2013) of 156 dogs conducted at University of California Davis, almost two-thirds of the dogs with disseminated cocci developed proteinuria, which ultimately leads to kidney shut-down.

But science is fighting back. MiraVista Diagnostics, in Indianapolis unveiled the results of a new diagnostic tool. Although veterinarians routinely run blood tests for cocci antigens, these can give false negatives during acute stages of Valley Fever or if the patient is immuno-compromised. And current bloodwork takes several days to get results. So a quicker, more reliable method, such as the new antibody detection kit that Mira Vista offers, could potentially speed up diagnosis and treatment. Results of tests show that cocci antibodies were detected in 87.9 percent of dogs infected with the fungus.

And speaking of faster treatment, Viamet in Research Triangle Park, NC, presented a summary of its experimental antifungal meds. Veterinarian Lisa Shubitz, an associate professor at the University of Arizona, previously tested Viamet’s VT1161 product in mice and found it superior to fluconazole, the latter being the current gold standard treatment for Valley Fever in both dogs and humans. In an upcoming trial Shubitz plans to test the efficacy of Viamet products in privately owned dogs diagnosed with cocci.

At the same time, Shubitz has been busy advancing development of a canine vaccine produced by Marc Orbach, a professor in plant science at the University of Arizona. Orbach created a mutant strain of the Valley Fever fungus by cutting out a gene necessary to the disease process.

Studies show that the mutant strain (called delta-cps1) does not make mice sick even when given 100 times the lethal dose. The missing gene affects the strain’s ability to reproduce and cause disease. The result is delta-cps1appears to have tremendous potential as a vaccine. And, as presented in a conference paper on canine interferon responses (in a test tube) to cocci antigens, healthy unexposed dogs can safely be used in future vaccine trials of delta-cps1 because their T-cells will remember the cocci antigens and hopefully release a cell-mediated interferon response that renders them immune.

Before the vaccine can be tested in dogs, however, more laboratory studies geared to longer term survival in mice must be carried out. Also, stabilizers must be added to delta-cps1 to formulate a liquid or freeze dried product with a decent shelf life. Then Shubitz will finally be able to perform large-scale safety and efficacy testing in 500 dogs to meet the regulatory and licensing requirements of the USDA.

All this will probably cost several million dollars, which in cost comparisons to a human vaccine is a great deal. Best of all, it would not only save hundreds of dogs, says Shubitz, but much of the science behind it can be transferred over to the development of a human vaccine.

If you wish to help, contributions can be made online at www.vfce.arizona.edu or mailed to the Valley Fever Center for Excellence, The University of Arizona, 1656 E. Mabel St., MRB Room 119, PO Box 245215, Tucson, AZ 85724; vfever@email.arizona.edu. Make checks payable to University of Arizona Foundation, EIN #86-6050388, Memo line: “Canine Vaccine.”