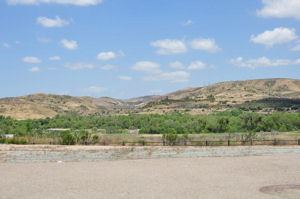 September 8, 2012 (San Diego’s East County) – On August 31, Cogentrix filed a supplement to its original application for the Quail Brush Generation Project (Quail Brush) in response to community concerns regarding the project. The filing includes several modifications to the plant developed in response to community feedback gathered over the past several months. Cogentrix states these would reduce visual and environmental impacts in the surrounding areas. Specific alterations to the Project are as follows:
A new photo simulation was also included in the filing, which responds to requests from the California Energy Commission (CEC). Cogentrix will provide a number of additional photo simulations from different vantage points. These renderings will be available the week of September 10, 2012.
To view the supplemental filing, click here.
Quail Brush is a 100-megawatt, natural gas-fired peaker plant located north of SR-52 in the City of San Diego near Mission Trails Regional Park.  It would produce up to 3,800 hours of generation annually during times of peak demand as backup for intermittent wind and solar resources.
The modified Quail Brush project will be fully analyzed during the CEC’s environmental review process. A Preliminary Staff Assessment, the equivalent of a Draft Environmental Impact Report, is expected to be completed later this year. The release of this document will be followed by a public comment period. The CEC also plans to hold a series of workshops this fall to provide opportunities for the community to speak.
Cogentrix representatives indicate that they will continue to listen and respond to the community's concerns throughout the approval process. The Cogentrix project website has additional information.
The project has generated substantial opposition in the community, with the Santee Council and Santee School District weighing in against the Quail Brush power plant.  For information on opposition to the project, visit
http://savemissiontrails.org/.