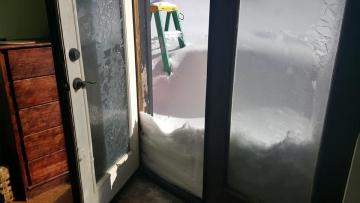 By Miriam Raftery
Photo by Dave Hogan:  Deep snow near his home in the Pine Valley/Mt. Laguna area
March 1, 2019 (San Diego’s East County) – Across Southern California, February broke records for cold temperatures.  Campo averaged just 42.5 degrees for the month of February, the chilliest since February 1956.  In Ramona, February temperatures averaged 46.8 degrees, tying the all-time record from January 2007.  Alpine’s average 47.7 degrees was the coldest since January 1955 and Palomar Mountain, at a brisk 35.3 degrees, was the coldest since January 1949.

Outside of San Diego County, the desert community of Palm Springs averaged 50.9 degrees, the coldest since January 1937.

“I knew it was interesting when I saw Big Bear Lake was completely frozen over last weekend,” says Alex Tardy, forecaster with the National Weather Service.
He adds, “Our immediate coastal cities have milder and likely due to the above average ocean temperature that has been around the past 3 years. “ 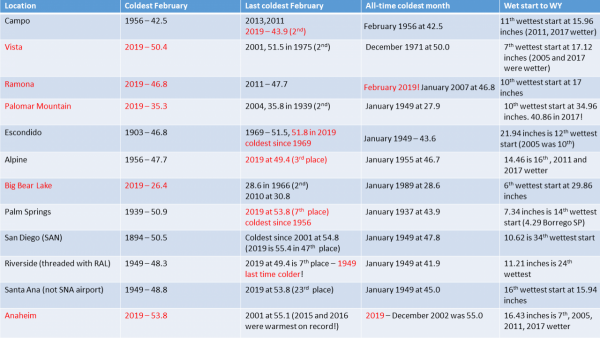 The Global warming freaks like Gore are in their igloos taking shelter from the truth. Weather cycles are under the control of the sun, moon and solar systems and our lifetime is too short to know much of anything that occurs over eons on this planet Earth.

Future generations may not have any lifetime if we don't get this under control.  And don't tell me  I  don't know enough to comment. My degree is in environmental studies. You might actually want to try reading the science insteady of the propaganda sites funded by the fosil fuel industry.