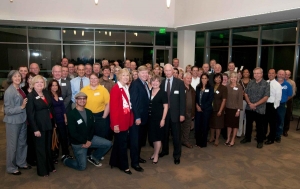 November 18, 2010 (Rancho San Diego) – Two departing Grossmont-Cuyamaca Community College District Governing Board trustees who helped oversee the transformation of the Grossmont and Cuyamaca College campuses were honored Tuesday for their years of service to the district.

Rick Alexander, who served for 20 years, and Deanna Weeks, a board member for six years, were feted at a reception at Cuyamaca College held before their last board meeting. Both decided not to run for another term.

Cindy Miles, chancellor of the Grossmont-Cuyamaca Community College District, said the retirement of the two trustees is the end of an era for the district.

“I want to give you a huge, huge thank you on behalf of Grossmont and Cuyamaca College and all of East County for your services,” Miles told Alexander and Weeks.

Both Alexander and Weeks were active supporters of Proposition R, the $207 million bond measure approved by East County voters in 2002. Fourteen projects were built on the two campuses with the bond money and state matching funds, including the Cuyamaca College Student Center where the reception was held. All of the Proposition R projects have been completed except renovation of a Student Services complex at Grossmont College and an expansion of Cuyamaca College’s Learning Resource Center.

Alexander was first elected to the board in 1990 and served three terms as board president. He said he’s proud to see the physical changes in the college campuses and the increased opportunities for education that they provide.

“It’s been one hell of a ride,” he told the group of college leaders and East County dignitaries. “We got a lot accomplished.”

During his time on the board, Alexander was an advocate for community colleges and was a founder and the first president of the Board Alliance of the San Diego-Imperial Counties Community Colleges Association. He led efforts that resulted in more financial aid for California’s community college students and more funding for community colleges that allowed them to expand their classes, programs and services.

Alexander also serves on the board of Middle College High School at Grossmont College, which allows 11th and 12th graders to get a jump start on their college credits.

Weeks was appointed to the Grossmont-Cuyamaca Community College District board in 2004 and was elected for a four-year term in 2006. She is currently board vice president and served as president in 2006.

Weeks said she’s proud of the new buildings at Grossmont and Cuyamaca College, and the colleges’ growth in enrollment and their growth in community stature.

“When you look at what the faculty and staff have done, it’s really an honor to be a part of it,” she said.

Bill Garrett, president of the Governing Board, said Alexander and Weeks will be missed. He cited Alexander’s expertise in real estate and construction, and Weeks’ business community perspective.

“They’ve always had the interests of the students in mind,” he said.

“You’ve never babied me,” Enders told Alexander. “You’ve always been direct with me. I always saw it as a sign of respect.”

To Weeks, he said, “I’ve always called you a classy lady. I’ve always looked up to you.”

Both Weeks and Alexander said they plan to remain active. Alexander said he plans to continue his work in commercial real estate, while Weeks said she is working with her husband, San Diego State University professor John Weeks, as a consultant in demographics.

“It’s one of the things on my bucket list,” she said.

The board will install its newly-elected members, Edwin Hiel and Debbie Justeson, on Dec. 14 following certification of ballot results.