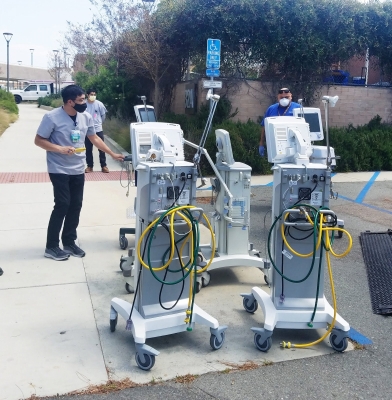 “This is a time for everyone to respond with the highest urgency,” said Chancellor Lynn Neault. “This global epidemic can only be fought with sense of unity and a common mission to help humanity in any way we can. This scourge has been a humbling lesson in how vulnerable we are, even in this modern age. I am grateful to our employees for opening their hearts and responding with such compassion.”

Grossmont College has loaned 18 ventilators to two local hospitals and the state as part of an effort to increase the supply of the life-saving equipment for COVID-19 patients.

The ventilators, which are used in Grossmont College’s Respiratory Therapy program, are valued at almost $400,000, said Nancy Saks, Senior Dean of Allied Health and Nursing at Grossmont.

Six of the ventilators went to Kaiser San Diego Hospital, five went to Sharp Grossmont Hospital in La Mesa, and seven others went to the state Office of Emergency Services. They were picked up at the college on Friday and Sunday.

As the number of COVID-19 patients increases, hospitals are experiencing a severe shortage of ventilators. The state of California recently sent out a request to colleges with health-related programs to loan out their ventilators.

She noted that the Respiratory Therapy program celebrated its 50 th  year last fall, and many of Grossmont College’s Respiratory Therapy graduates now work at the hospitals getting the ventilators. Since the program began, more than 1,000 respiratory therapists have graduated. Their training includes 576 hours of clinical experience at an array of local medical centers.

“Students have gone to those facilities to get trained,” Saks said. “We ‘re giving back to help the community by loaning a piece of equipment that is really needed.” 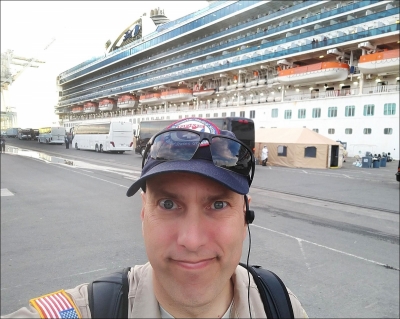 Grossmont College chemistry instructor Jeff Lehman was set to spend spring break with his wife on a cruise ship bound for Mexico. Then COVID-19 struck.

Lehman instead spent three weeks in March doing disaster relief work, removing and relocating passengers off the Grand Princess cruise ship that was stranded off the California coast after several aboard were sickened by the deadly virus.

A member of the government’s National Disaster Medical System, Lehman was deployed to relocate 800 of the 2,400 passengers from the Port of Oakland, where the massive ship debarked to Travis Air Force Base near Sacramento for a two-week quarantine. Additional units of the system’s Disaster Medical Assistance Team handled relocations to other military bases, including Marine Corps Air Station Miramar in San Diego.

“This was one of the more complex incidents that I have worked because there were county, state, federal and international officials and agencies involved,” said Lehman, who has spent 14 years with the disaster response system. The system operates under the U.S. Department of Health and Human Services and is called into action during major disasters to help fill in gaps, supplementing health and medical systems and response capabilities. Lehman’s past deployments include hurricanes Sandy, Harvey and Dorian and Typoon Mangkhut in Guam.

After the four days it took to screen and bus passengers to Travis, Lehman spent the rest of the mission at the military base. Clad in personal protective equipment when entering the cordoned off “hot zones,” he handled tasks ranging from meal and mail deliveries to taking passengers’ temperatures.

Asked what motivated him to deploy for the mission, Lehman spoke about his personal beliefs.

"My faith provides a model for service," said Lehman, who also trains and volunteers for a search and rescue crew that responds to wilderness emergencies throughout the state. "Service comes in a variety of manifestations. I am thankful for those who serve in ways that I am not well equipped. I happen to have an aptitude for operating in, and managing resources during disasters, so this is what I do."

Seven boxfuls of outdated uniforms for Nursing and Allied Health students were taking up space in the department’s building on the Grossmont College campus. The uniforms couldn’t be used by students and were slated for disposal, but the boxes were still there when Saks stopped by the office on Friday while arranging for the loan of the ventilators to local hospitals and the state.

"We just had to find something to do with them," Saks said. “Then one faculty member got the idea – let’s make masks out of them."

Saks said the masks will be distributed to the Alvarado Parkway Institute Behavioral Health system and to support units of the San Diego Police Department, such as the psychiatric liaison unit. They are reusable after washing.

“We’re glad we found a way to make use of those uniforms so they can help our community,” Saks said.