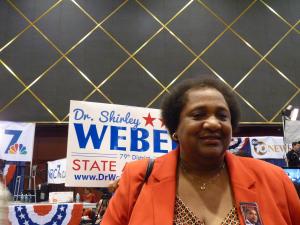 November 7, 2012 (San Diego’s East County) – For Shirley Weber, PhD,  victory in the 79th Assembly District is particularly sweet.    “This is the first time an African-American has served in theLegislature in San Diego or south of Los Angeles,” Dr. Weber told ECM.  “The 79th district is only 10% African American, which says a lot about voters in this district.”

The daughter of a sharecropper, Weber found education to be the key to her future.  She earned three degrees by age 26.   “I’ve always been a strong voice for education,” said Weber, a Democrat. With over 88% of the votes counted, Weber leads her Republican challenger, Lemon Grove Councilwoman Mary England, by approximately a 60-40% margin.

A professor at San Diego State University, she has served as president of the San Diego Unified School District Board and now hopes to serve on the Assembly Higher Education Committee—following in the footsteps of  Assemblyman Marty Block, who tonight was elected to the State Senate.

“I am honored to have won the support of so many who see that high-wage jobs and better public schools are key to getting our economy back on track,” said Dr. Weber on election night.

“Tonight, the challenges we face are clear. Our economy isn’t creating enough high-wage jobs – jobs that allow families to purchase a home, send their kids to college and retire with dignity,” Weber said. “In Sacramento, I’m going to focus on doing basic things we know help create good jobs – fundamentals like improving the business climate in our area, expanding access to high-quality public education, and investing in infrastructure projects that put our friends and neighbors back to work.”

Weber told ECM race has never been an issue in her campaigns.  In this election, she said she didn’t need to introduce herself to voters, since so many already know her through her long years of service.  “When I was knocking on doors campaigning, people would remind me of how I helped their child in school or spoke at their graduation,” she said, but added, “It was great to reintroduce myself to the community.”  She also praised her opponent, Mary England, for "running a great campaign." 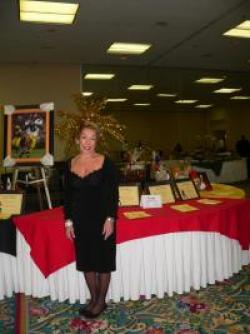 England, had this to say in an e-mail message to suporters. “This has been an amazing experience in my professional life...Although there may be some disappointment with the outcome of this race, keep in mind that we knew going into this race it would be a difficult one."

She added, “As the current President and CEO of the La Mesa Chamber of Commerce I will continue to serve the business community and hopefully continue to make an impact on the local economy and lives of business people during these difficult times.” England retires December 4 from the Lemon Grove City Council. “This retirement will be bittersweet for me, as I have served the Lemon Grove community in this capacity and as the leader of the Lemon Grove Chamber of Commerce for over 19 years," she said, adding that she will continue to work with legislators to "make the changes necessary to get people working and turn our state around.”

England ended her message with a selfless request. “As we enter the holiday season, I encourage you to help make the holidays brighter for those less fortunate and our brave men and women overseas. There are also the people still devastated by Hurricane Sandy that need assistance. There are many worthy charities that do wonderful works for those in need, as well as those that are beginning to assemble care packages to send to our armed forces overseas.  I encourage you to find one that fits your needs and be a part of their holiday program(s).”